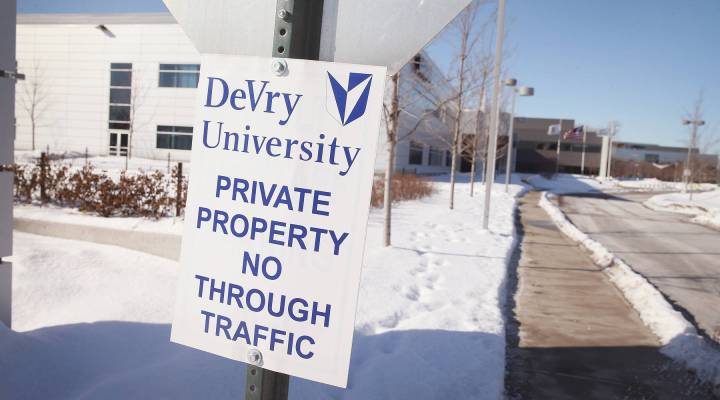 DeVry is getting hit by several industry trends, including a weaker revenue picture and legal troubles.

Enrollments at for-profit colleges have been falling lately, according to Stephen Burd with New America, a public policy institute.

Burd said interest in for-profits has also declined because of state and federal investigations into the schools’ job placement rates.

“In part, that’s because the government doesn’t have a single standard that they use to say what a job placement rate is,” he said.

Last week, the Federal Trade Commission filed a lawsuit against DeVry University. It said the school falsely advertised that 90 percent of job-seeking graduates land work in their fields within six months of graduation, among other claims.

Trace Urdan, a Credit Suisse analyst, said the for-profit sector’s getting singled out.

“The administration has effectively declared war on this industry,” Urdan said.

Urdan said the FTC lawsuit could cost DeVry anywhere from $250 million to $1 billion. But he said DeVry has good financial resources and likely won’t go the way of Corinthian Colleges, which declared bankruptcy last year after a series of legal challenges.