Squatters rack up costs for archdiocese

Squatters rack up costs for archdiocese

Bob Moon: Back in 2004, the Catholic Archdiocese of Boston decided to close and sell 70 churches. The move followed the payment of more than $141 million to settle sexual-abuse lawsuits. But parishioners at five of those churches refused to leave.
And they’re still there. They’re not holding formal services, they’re just squatting 24-7. The stalemate has ended up costing the Archdiocese more than a half-million-dollars a year. And as Monica Brady Myerov reports from WBUR, that price tag could get steeper.

Monica Brady Myerov: Maryellen Rogers shows off five handmade quilts hanging near the altar of St. Frances Cabrini Church in Scituate, a town 30 miles south of Boston. Each quilt marks a year that a group of parishioners has been occupying the building illegally.

MARYELLEN ROGERS: They represent who we are, third anniversary quilt is called the journey quilt, and it’s a road. It’s a road to the church. There’s bridges that we want to build the bridges with the Archdiocese of Boston.

She and her husband John are two leaders of the sit-in or vigil as they call it. They coordinate more than 100 people in shifts of two to stay in the church day and night.

John Rogers is surprised the sit-ins here and at other churches are still going on.

JOHN ROGERS: I thought it would be done within the year.

The Archdiocese probably wishes it had been. It’s paying $600,000 a year to keep the buildings insured and provide the squatters with heat, electricity, and other services. Local church leaders say it’s only right to pay those costs while the Vatican weighs appeals from parishioners to keep the churches open.

MARIAN BATHO: We probably did not expect that it would be five years, but Cardinal Sean made the commitment to do nothing really until the appeal process had been completed.

The church is also paying an additional $700,000 for nearly 25 other closed churches that have either not sold, or are also the target of formal appeals to remain open.

If that wasn’t headache enough, the Archdiocese could soon be paying more than maintenance costs if local officials get their way.

The town of Scituate has slapped the Archdiocese with a bill for nearly $150,000 in back taxes. To the town’s way of thinking, the Archdiocese no longer considers St. Frances Church a holy sanctuary. Therefore, the building should no longer be exempt from local property taxes.

Jason Talerman is a lawyer for the town.

JASON TALERMAN: No one is above the tax code and when it comes to providing a teacher for your kids or that necessary firefighter or for salt for the roads. We need money. And it is the equivalent of a full-salaried teacher.

The Archdiocese wouldn’t comment on the tax issue. It has paid the taxes into an escrow account while it fights the move. In court fillings, the Archdiocese maintains the churches should still be considered tax-exempt until the Vatican rules on their fate.

Meanwhile, other towns around Boston have sent their own tax bills totaling more than $130,000. The Archdiocese is fighting those in court too. The Vatican could rule on the disputed churches in the Boston Archdiocese as early as this spring.

Peter Borre leads an organization that supports the closed parishes. He suspects market forces, as much as Vatican bureaucracy, have delayed a final decision on the disputed churches.

PETER BORRE: Given the condition of the real-estate market yesterday, today, and probably tomorrow, these properties cannot be sold readily.

The squatters at St. Frances Cabrini say they have enough money to buy the church. But the Archdiocese doesn’t seem interested. The cardinal has not met with leaders of the sit-in since last year. 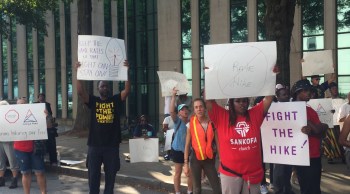