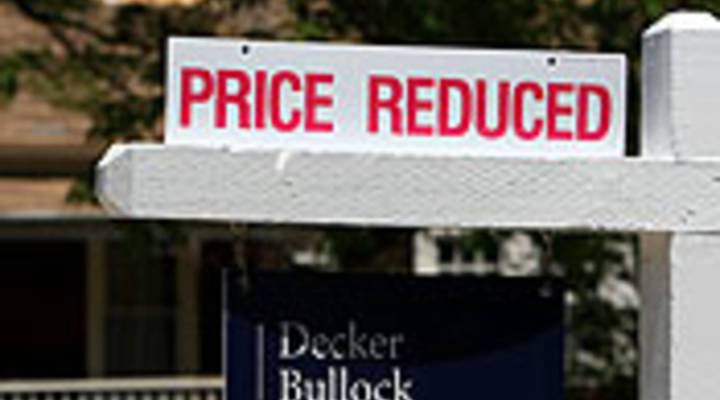 COPY
A realtor sign advertises a reduced price in front of a home for sale in San Anselmo, Calif. Justin Sullivan/Getty Images

A realtor sign advertises a reduced price in front of a home for sale in San Anselmo, Calif. Justin Sullivan/Getty Images
Listen Now

Kai Ryssdal: On the larger economy, there were some small signs of promise today. They are still down year over year, but used home sales for May were up nearly 2.5 percent from April, when they were in turn up from March. But prices continue to take a beating. We asked Marketplace’s Stacey Vanek-Smith to figure out why.

STACEY VANEK-SMITH: The median home price is down about 17 percent from last year. The reason? Foreclosures, of course. Buyers are bargain hunting. And owners of more expensive houses aren’t selling unless they have to. But there’s another problem says economist Lawrence Yun with the National Association of Realtors. He says appraisals are coming in low.

LAWRENCE YUN: The buyer and the seller agree to a price. Yet when an appraisal is coming in, it’s coming in much lower than the agreed price.

If the appraiser values the home at less than what the buyer agreed to pay, the buyer, not the mortgage lender, has to make up the difference.

MARIANNE Snygg: I heard about one just last week.

Colorado realtor Marianne Snygg says this is causing deals to fall through.

Snygg: The buyer will need to come out of pocket for the difference and a lot of times the buyer can’t.

CHRIS MAYER: I think that’s a bit like blaming the messenger for the bad news. Prices are falling in housing and down payments are unfortunately going to be high, and it’s going to be very hard to complete transactions. So I think yelling at appraisers is misplaced blame.

Mayer says foreclosures are the real culprit in driving down prices. And, more of those are on the way. As long as bargain-basement homes are coming onto the market, all buyers will be looking for deals. And as long as that continues, Mayer says, prices have nowhere to go but down.