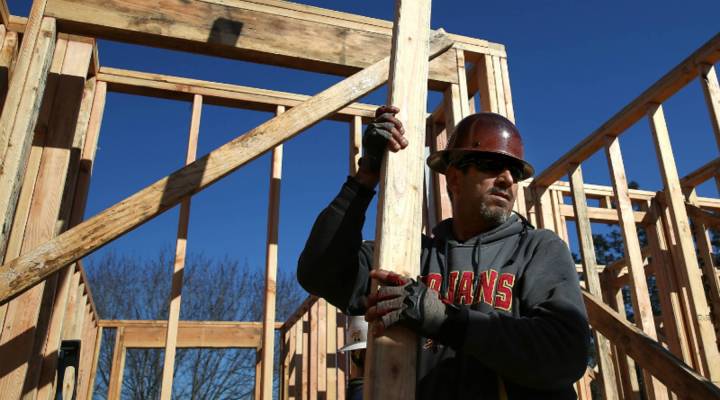 COPY
New home sales are less than half of what they were in the mid-2000s. Justin Sullivan/Getty Images

New home sales are less than half of what they were in the mid-2000s. Justin Sullivan/Getty Images
Listen Now

The U.S. Commerce Department reports new home sales for April on Tuesday. A small increase is expected from the 511,000 annual rate reported for March.

Housing been one of the bright spots in the economic recovery, with existing home sales strong, home prices rising, and mortgage rates historically low.

“Homebuilders have been very slow in getting construction online,” said Lawrence Yun, chief economist at the National Association of Realtors. “The trend line is up, but it’s coming from a very low base and it is grossly inadequate.”

Yun explained that the current supply of new homes is inadequate to meet buyer demand—especially from young families facing high rents and looking to purchase a first starter home on a limited budget.

Yun said several obstacles stand in the way of builders significantly scaling up new home construction. Banks are hesitant to lend to small homebuilders after the massive financial losses bankers and builders alike suffered in the housing crash. Builders say they can’t find enough skilled construction workers. And Yun said it’s ever harder for developers to obtain cheap land and the necessary permits to build big developments of affordable homes on the suburban outskirts of big cities.

“So the builders have jolted over to more expensive homes, catering to more upper-end, high-income households,” Yun said.