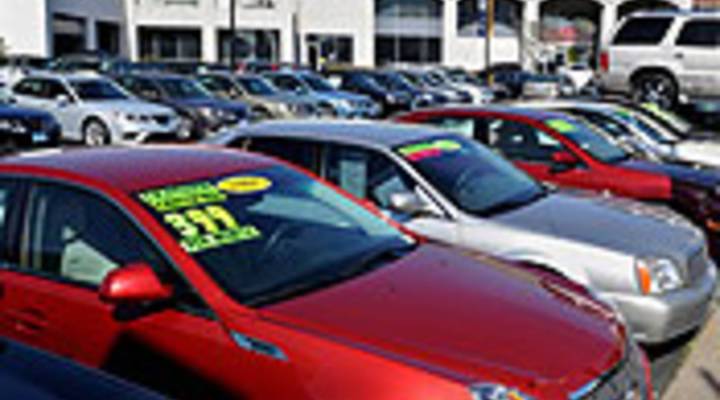 COPY
Cars manufactured by General Motors, which include Cadillacs, Pontiacs, GMC and Saab's, wait for buyers at a dealership in Los Angeles. Mark Ralston/AFP/Getty Images
Fallout: The Financial Crisis

Cars manufactured by General Motors, which include Cadillacs, Pontiacs, GMC and Saab's, wait for buyers at a dealership in Los Angeles. Mark Ralston/AFP/Getty Images
Listen Now

Here with some perspective is our good friend Phil Reed, Senior Consumer Advice Editor for Edmunds.com. Welcome back to the program.

Phil Reed: Good to be here.

Vigeland: We’re still in the midst of a credit crunch. We’ve heard a lot about what it’s doing with mortgages, with bank accounts, what about cars?

Reed: Well, it’s interesting. The word “credit crunch,” of course, has scared off a lot of people. So there have been a number of people who’ve thought, “I won’t be able to get finance, so I’m not even going to go car shopping.”

So, we have to be a little careful about that. You can get credit, there’s some outstanding offers on car loans right now. But it’s a little harder to get qualified. And part of that is because they’re trying to clean up their act.

Vigeland: The big thing recently in auto financing has been these layoff protection programs, where you lose your job, you don’t have to make your payments. Has that changed anything for the people who are doing loans?

Reed: It may have convinced some people to buy cars. Hyundai was the first one to do it. They did it last fall and it was very successful for them. First of all, they got a lot of media attention, because it was kind of new, nobody had tried it before.

The interesting thing was not many people took them up on their offer. So a lot of people were buying cars, but not many people brought them back. This convinced Ford, GM, Chrysler to try their own programs, which were introduced about a month ago.

Vigeland: So should we equate that if you buy a car, you won’t lose your job?

Vigeland: How are people behaving when it comes to buying a car these days. Do you see people holding back a little more, keeping their cars longer?

Vigeland: And that’s a bit ironic, because isn’t it actually a good time to buy a car? Aren’t there quite a few deals out there, a bit of a buyers’ market?

Reed: Well, for bargain hungers, it’s a great time to buy a car. One of the things that slowed people down a little bit is there may be new things coming, for example, the Cash for Clunkers program. Some people may have heard about that and they’re waiting to cash in on it.

Vigeland: And this is where the Obama administration has suggested that there may be a plan, where you can bring in your car that gets terrible mileage and buy a new car that has a lot better mileage and you’ll get a tax break based on the difference.

Reed: Yes, that’s right. It could really play into some people’s hands. Some people that have a very old car, that’s a gas guzzler, that’s not worth hardly anything, are guaranteed of getting up to $4,500 towards the purchase of a new car.

So it could play really well for some people, particularly for truck owners, for people who want to trade in their truck in. And the idea is it’s going to boost the fuel economy, take some polluters off the road and also stimulate the economy.

Vigeland: I also want to ask you, you know, it’s been about a year since we first started to see these big spikes in gasoline prices and everybody was talking about how fuel efficiency was going to be the word of the day, nobody could get rid of their SUVs anymore, sell them on the market. Has that changed now, since gas prices have come to more normal levels?

Reed: Yes. I mean, last summer, about the only things that were selling were hybrids and small cars. I mean it almost completely wiped out the truck and SUV market.

I mean, it’s just incredible how quickly people forget. There seems to be this default position, where they believe that gas is going to be affordable and plentiful forever. And as soon as the problem gets fixed — and the fix is low gas prices — people go back into those categories.

Vigeland: Final question: You guys do all kinds of ratings on cars and trucks and all kinds of automobiles. What are you recommending these days?

Reed: Well, we’re on the verge of seeing fully electric cars for the first time. Nissan, next year, will bring one out. Of course, we have some Teslas on the road right now. And the Mini-E is coming out. We’re hoping to get one of those.

Reed: So we could, if people want to wait and wait about a year and a half, there will be electric cars available.

Reed: Well, everybody’s saying the end of the next year is going to be when it comes out, because also, the GM has the Chevy Volt, which has been talked about for a long time. That’s not fully electric, it’s plug-in electric hybrid.

So those are some cars that will be very exciting. We have quite an abundance of very good hybrids. For example, the Ford Fusion hybrid has been getting very good reviews, it’s a mid-size sedan.

Vigeland: Phil Reed is with Edmunds.com. Thanks so much for coming in.

Reed: My pleasure, thank you.