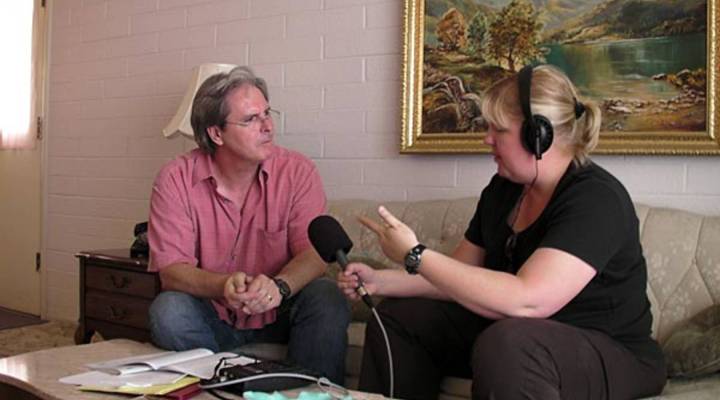 TESS VIGELAND: Over the last 50 years Sun City definitely created a vivid picture of retirement. But it may not be a vision that lasts for another 50.

Kevin McHugh teaches cultural geography at Arizona State and he’s studied the Sun City model. I thought he might have some perspective on its future. And so we met up at the place where it all began.

VIGELAND: So we are sitting here in the original living room of the first model home in Sun City. What did the creation of Sun City signal for the whole idea of retirement?

KEVIN MCHUGH: It signaled the fact that retirement was in a period of inevitable decline and decrepitude that, as you know if you talk to anybody about the history, people who lived here thought of it as a utopia. It was an idyllic place. And it’s a place where everybody was old and so no one was old. I think the sense of belonging in older age is really critical.

VIGELAND: Obviously, there are plenty of people who retire outside of a community like this. But how, if at all, is Sun City emblematic of the notion of retirement as part of the American Dream? That it’s something that you should and will be able to attain in your lifetime?

MCHUGH: People just assumed that if you worked hard and you paid your dues and you saved that you’d have this little slice of the American Dream upon retirement. But of course financial uncertainties, especially lately, have sort of rocked the Dream. So much of our rhetoric and discussion of retirement communities goes back to the early Sun City and the first generation and a lot of the mythology. But now there’s other generations coming through.

VIGELAND: Then what do you think retirement looks like going forward. Is a place like Sun City part of the next generation’s notion of retirement?

MCHUGH: Well, first of all, retirement communities are being populated by people that continue to work or work part-time. So it’s not as if it’s an abrupt end to your career or your involvement in work. I think a lot of this reflects changing cultural attitudes and ideals about aging. In a society that adulates midlife, and the continuation of midlife, I don’t think we’re about to really sanction places for old people. And so the language is shifting to reflect these cultural ideals.

VIGELAND: So what is that language, then? Give us an example of that shift.

VIGELAND: How much of it, if any, has to do with concerns over being able to afford the kind of retirement that our parents and grandparents have been able to do.

MCHUGH: Well, that’s obviously a concern. And you can talk to economists about this and they’ll tell you about savings, and people aren’t saving. And in fact, this retirement community phenomenon was always a slice of retirees. It was never a big slice. It loomed large in the American psyche. But it really wasn’t a large slice of the American populace. I just think that the official sanction of age-segregated communities is going to go away. And, not the fact that older people won’t congregate, because there’s a lot of advantages people feel for staying in the same place. There are social networks and attachments to place that aren’t easily severed. So I think this idea of aging and place is going to become more important in the future.

VIGELAND: Kevin McHugh, thanks so much.

MCHUGH: You’re welcome. Thanks for having me.