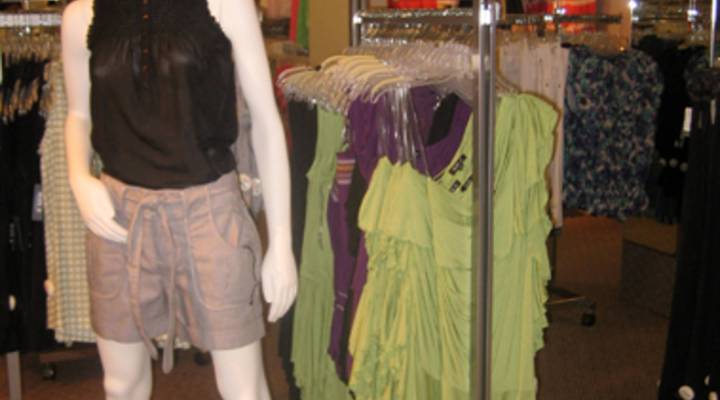 COPY
A display for Allen B. at a JC Penney in Glendale, Calif,, one of the new designer lines Penney's is carrying. Stacey Vanek-Smith

A display for Allen B. at a JC Penney in Glendale, Calif,, one of the new designer lines Penney's is carrying. Stacey Vanek-Smith
Listen Now

Kai Ryssdal: As we learned from today’s retail sales report, consumers aren’t feeling any economic love. And anyway, a lot of retailers have already moved on. They’re already thinking about fall and back-to-school shopping. There’s a lot at stake. Back-to-school sales are second only to the winter holidays as a portion of retailers’ incomes. For store buyers, this is actually a pretty good time. It’s their first chance since the recession really took hold to use what they’ve learned about how shoppers have changed and tailor their inventories to a down economy. Marketplace’s Stacey Vanek-Smith reports.

STACEY VANEK-SMITH: Shopping has become all about the waiting game. You see something you want and you wait while the price drops…and drops…and drops. Things got that way because when the recession hit, retailers were sitting on piles of inventory they’d ordered when we were still spending with abandon. To get rid of all that merchandise, stores had to slash prices. Candace Corlett heads up WSL Strategic Retail. She says stores are cutting orders way back for fall. And looking for ways to break consumers of their discount addiction.

CANDACE CORLETT: The back-to-school season is the first season where retailers have really have to face the reality check and say, this is a whole different shopper out there.

Corlett says consumers are now taking a moment to think before they buy. Sounds kind of un-American, but in a nationwide survey, Corlett’s company found nearly three-quarters of shoppers were giving their purchases more thought. Like hairdresser Monica Wood. At an outdoor mall in Los Angeles, she says she’s trained herself to stop and think.

MONICA WOOD: I’m a big spend-in-the minute. Like I see it, and I love it. And then I get home, and I have five more just like it. I do think about my purchases more. I think about what I have at home.

NANCY KOEHN: This is the biggest single change in consumer behavior in at least 50 years.

Nancy Koehn is a retail historian at Harvard. She says the shift is not just about saving money; we’re completely rethinking how we spend. Remember those frenzies at H&M and Forever 21 where shoppers snapped up cheap fashions by the armload? Koehn says that brand of disposable fast fashion is going out of style.

NANCY KOEHN: I mean, we did more is better for 15 years and look where it got us? The consumer is saying, I want to work with retailers hat seem to have something of quality and worth that reflects the hard-earned money that I put into buying that good or service.

Koehn says those shoppers are willing to pay more for things that will last. And while they are headed up-market, there’s another group of shoppers taking a step down. Those who used to outfit themselves and their families at high-end stores like Banana Republics and Nordstroms. Places they can no longer afford. Again retail analyst Candace Corlett.

And those lower-priced chains are greeting them with trendier and sometimes more expensive merchandise. Kohl’s has commissioned a line from MTV fashion plate Lauren Conrad. JC Penney just rolled out new fashions from Allen B. and I Heart Ronson.

The new lines are some of the priciest in the store. Jeans for 80 bucks, short shorts for 40. Stephen Lawrence is an apparel manager for Penney’s. He says the move up-market is risky, but the recession is an opportunity.

STEPHEN LAWRENCE: As we’re seeing the consumer not be able to afford some of the luxury goods they had in the past, giving them some of those styles at prices they can afford was a viable space for us to play in.

EVA FIGUEROA: When they come in, they go, oh we didn’t know that you carry that label. And they make comments that, you know, the prices are pretty good, versus what they used to pay in other stores.

Good enough that some of the lines are starting to sell out and that’s what retailers are banking on for the fall. That if they choose their fall inventory wisely, consumers who try to play the waiting game, will find that by the time they’re ready to spend, there’s nothing left to buy.

Data Points from How America Shops®

71% agree: Before I buy something now I stop to ask myself, “Is this a smart use of my money?”

46% agree: I can afford to buy things, but it has to be different and special. I’m not going to buy just to have more stuff.

56% agree: Before I ask for something now, I’m more likely to think about how my parents will be able to afford it.

50% agree: I will cut back on little things to be able to buy an expensive item I really want

46% agree: I’ll buy a pre-owned product if it lets me get a brand that I couldn’t afford new.

42% agree: I’m asking my parents to buy me less stuff