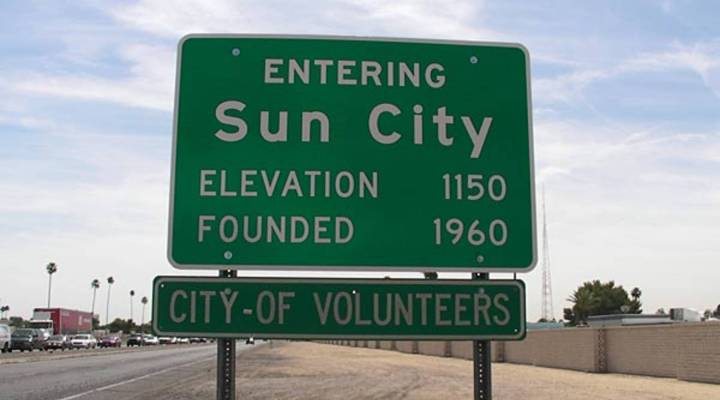 Is Sun City in its sunset years?

Is Sun City in its sunset years?

TESS VIGELAND: All this week we’re looking at that question of The Next American Dream. Today we’ll tackle the retirement part. Because so many of us are wondering how on earth we’re going to be able to afford it. And what compromises we’ll have to make.

PAM MACDONALD: Sometimes I miss the sound of children. You go into the Arby’s or the McDonalds out here and there’s no children. It is just full of old people, of which we don’t feel we belong yet. That’s because we are still working.

We’ll get to that part of it in a bit.

First, did you ever wonder how retirement came to be part of the dream? The creation of Social Security in the 1930s made it possible for people to stop working at a certain age. But the typical retirement picture we all hold in our minds? That didn’t come along for another couple of decades.

It started on a piece of property much like this one in Sun City, Ariz. — the nation’s first retirement community.

BILL PEARSON: This is unbelievable.

VIGELAND: How tall is that?

That’s 60-year-old Bill Pearson. We stood in his backyard admiring a cactus that was so photo-ready I looked around for the howling coyote. Pearson is in charge of Sun City’s 50th anniversary celebration, which is coming up on January 1st.

PEARSON: They called it the largest social experiment the country’s ever seen when they built Sun City, because it was unlike anything that at the time. . . . [phone rings] Hello. The decals? Oh wonderful. . . .

He’s fielding all kinds of calls about the festivities.

Pearson and his wife moved here five years ago from Minnesota. But they were so prepared to live the Sun City retirement dream that they bought the house before they were even old enough to move in. The age restriction is 55 and up.

And then there are The Walls. Capital T, capital W. A 6-foot-tall ring around the city that’s only missing a moat and drawbridge.

Pearson: We are a walled community, but not gated. But there’s a mentality that exists here that is, within these walls there is a serenity, a peace that peple describe as a regligious experience.

A religious experience without children. Kids can visit for no more than 90 days a year. And without government interference. Sun City is unincorporated. Just as it’s been since real estate magnate Del Webb launched the experiment on January 1st, 1960.

Webb is credited by some with coining the phrase “the golden years.” And he had big dreams for the seven-mile-long, two-mile-wide strip of desert north of Phoenix. He hoped 10,000 people might attend that opening day. Instead, more than 100,000 streamed in.

Sun City, the advertising promised, was not only about age-restricted living, it was affordable.

MOVIE CLIP: At home you’d have to be the town banker, really loaded to enjoy this kind of life. But the truth is, when I retired, I retired on less than $400 a month. And I bought the most expensive house on this block.

Today the Sun City dream lives on in retirees like Pearson and Joan Adair.

We met Joan at the Bell Recreation Center gym, where she works out each morning. She’s 74, going on what looks like 64. With eyes that match her turquoise shirt and eye shadow.

JOAN ADAIR: The living here is very inexpensive compared to where I came from. I retired from California, and I knew when I retired, I wouldn’t be able to live there.

Adair lives off a pension and Social Security. Her Sun City condo costs about $500 a month. A quarter of what she paid to park a mobile home in Southern California. And for about 400 bucks a year she can access all kinds of activities from swimming to shuffleboard to computer classes and karaoke.

Adair: It’s been great. I love it!

VIGELAND: Are they your golden years?

Adair: Yes, they are. Absolutely. I often wonder how I worked. I have to admit, I do get tired of the old people. I don’t count myself as part of it. I consider myself young thinking. And frankly, I wish the age would be lowered to maybe age 50.

But if they lowered the age limit, would people come? Is this the retirement ideal for future generations?

Bill Pearson, the 50th anniversary organizer, believes it will be.

The Pearsons and their two dogs, Phoenix and Sedona, live in an expansive adobe-style house with walls painted every color under the desert sun.

As with Joan Adair, Sun City’s relatively low cost was a big attraction for them. And Pearson believes communities like this may find themselves in even greater demand as baby boomers worry about their retirement savings.

Pearson: The American Dream, retirement, it’s elusive for a lot of people these days. Because defined-benefit plans are going away. So many people are seeing that nest egg they put away, they’re having to live off of it, they lose their job. So a lot of folks are saying, “Hey, we can’t retire. The 50th is our chance to show people that like this lifestyle, a simpler way to live, a cheaper way to live.

But that lifestyle also assumes a traditional retirement. Meaning, you’re no longer working. And you can participate in what Sun Cityites tout is their volunteer-based community.

That picture, the picture that launched a million retirement dreams over the last decades, is already blurring. And that, says Pearson, is the biggest fear of all.

PEARSON: The key to Sun City’s future, the next 50 years, is really in our ability to cling to our past. This is a collective setting. Unfortunately, as people move here, they’re all too often having to work.

And that’s not the American Dream Del Webb envisioned.