Kai Ryssdal: American Airlines is set to report first-quarter profits tomorrow. And if early indications are any guide, it’s not going to be pretty. American and United and all the rest of the big airlines are expected to report losses in the many billions of dollars over the next week or 10 days. That might not jive with what passengers are seeing. Namely airplanes packed as full as they can be. So we’ve called aviation analyst Richard Aboulafia to ask why that is. Mr. Aboulafia, good to have you with us.

RICHARD ABOULAFIA: Pleasure to be here.

Ryssdal: Gas is cheap. Planes are full. And yet the major carriers in this country are about to report earnings that are billions of dollars in the hole.

ABOULAFIA: Well, numbers are actually way down, even though the planes are full. That’s only because the airlines have been able to shrink themselves in line with slack passenger traffic demand.

Ryssdal: That is to say people aren’t flying. But is that corporate or consumers? Because if I’m paying for the ticket, there are some deals out there.

ABOULAFIA: Well, it’s pretty strange. Normally, when you have slack numbers like these, it’s the back of the plane — consumer demand — that leads the problem. But this time around, business demand has actually been the problem. That’s not to say that consumer demand is holding up great, it’s just that businesses have really led the way in cutting back.

Ryssdal: And yet, I read this morning that Delta is still expecting, despite a quarterly loss that it’s about to report, it’s still expecting to make money for the whole year. How can that be?

ABOULAFIA: Well, there is a general feeling — just like with the rest of the economy — that passenger travel demand has hit rock bottom, but we’re clawing our way back. So even though the numbers you’re seeing out of the airlines are bad, there’s a feeling that this is as bad as it gets, and there will be signs of recovery after this.

Ryssdal: Which is to say summertime demand, yes?

ABOULAFIA: Summertime demand, holiday travel demand. Plus, generally just a feeling that the economy had a heart attack in the fourth quarter of last year, first quarter of this year, and we’re recovering from that. Bans on travel by companies and governments are being relaxed. People are starting to spend discretionary income on travel again. You’re seeing signs of life.

Ryssdal: I’ve been talking mostly about the big name carriers. What about the smaller, more regional airlines in this country. How might they be doing?

ABOULAFIA: In general, traffic is down for everybody. It’s a very difficult environment for the regional players. The low-cost carriers generally have been faring a little bit better than the majors, especially Southwest that always somehow pulls ahead of everybody. But still with traffic declines like these, that you’ve seen over the past six months, it’s safe to say that nobody is truly prospering.

Ryssdal: Here is the million-dollar question, though: When are they going to start putting more airplanes on these routes so we don’t all get stuck in the middle of a three- or four-seat combination on those packed airplanes?

ABOULAFIA: The problem is that given the fares and where pricing is heading — which is straight down — the only way to make money is by keeping planes as full as possible. And even there, despite how crowded it seems, they haven’t fully been able to keep pace with declining traffic numbers. So it might seem like an illusion, but in reality, load factors — the percentage of each plane that’s filled — they’ve actually declined a little bit.

Ryssdal: So what I hear you saying, though, is that we might actually find more full planes, fewer planes on the routes and more people on those planes.

ABOULAFIA: You know, a few years ago nobody knew that airlines could routinely charge $250 for cross-country, round-trip flights and still survive as a business. And yet, they are. And part of that, of course, is that they’re really good at filling planes. Their only hope, unless that pricing improves, their only hope is to keep those planes as full as possible.

Ryssdal: Mr. Aboulafia, thanks very much for your time. 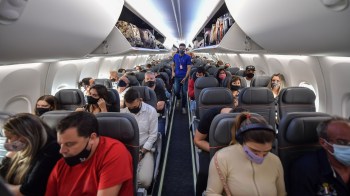