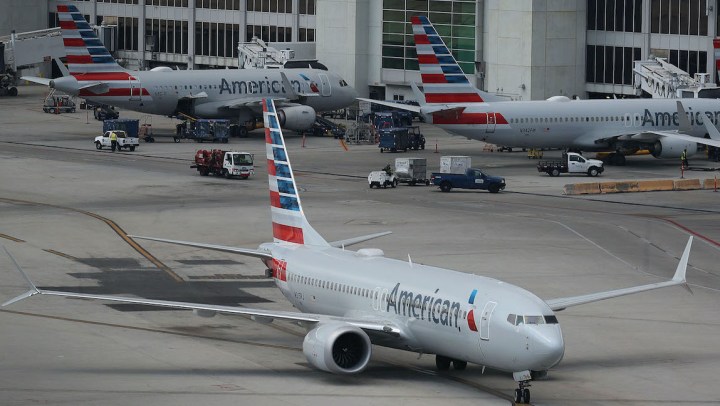 COPY
What will 2021 look like for air travel? American and Southwest lost billions of dollars in 2020. Joe Raedle/Getty Images
COVID-19

What will 2021 look like for air travel? American and Southwest lost billions of dollars in 2020. Joe Raedle/Getty Images
Listen Now

American Airlines and Southwest reported financial results Thursday. And, it will not surprise you to hear, both airlines had a terrible year. In the words of American’s CEO, Doug Parker, it was “the most challenging year in our company’s history.”

American posted a net loss for the year of $8.9 billion. And Southwest recorded an annual net loss of $3.1 billion.

Now with vaccines starting to roll out in the U.S. and a growing number of countries, will more people consider traveling in 2021?

When the pandemic started, air travel dropped more than 95%.

Though it has come back some, Richard Aboulafia, an aviation analyst at Teal Group, said 2020, for airlines, “was the worst year they faced pretty much in the history of the jet age.”

Airlines and analysts expect 2021 will be better, but how much better really hinges on the vaccine rollout, said Saikat Chaudhuri at the University of California, Berkeley. “When vaccines came out, there was a lot of optimism and excitement that there’s a light at the end of the tunnel, and 2021 would mark this rapid era of strong recovery.”

That excitement has already receded, in part because of how slow the vaccine rollout has been so far, said Edward Russell, who covers airlines for Skift and Airline Weekly. “The high infection rates that we have seen over the last few months, coupled with the new administration that probably rightfully wants to implement new restrictions to slow the spread, has really tempered the outlook,” Russell said.

Including the new requirement that everyone flying in from abroad now has to show proof of a negative COVID test.

Industry analyst Robert Mann said all those factors will likely mean a slower-than-expected recovery for air travel in the first half of this year, but “the back end of 2021, I think under all realistic scenarios, should look a lot better than we initially planned.”

A real rebound for international travel, Mann said, could still be another year or more away.