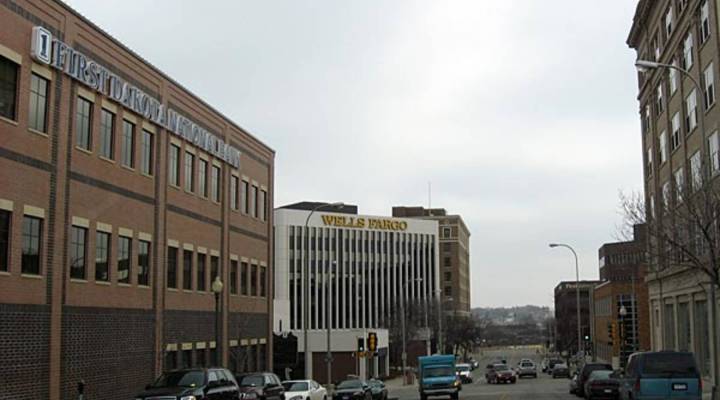 Kai Ryssdal: Next time you get a credit-card statement in the mail, take a minute and look at the address they want you to send your checks to. It’ll probably be the same place a lot of the credit-card solicitations you get come from: beautiful downtown Sioux Falls, South Dakota. Sioux Falls is pretty much credit-card central. It’s also one of the reasons your interest rates are so high. In the first of a two-part series, Marketplace’s Stacey Vanek-Smith takes is to the town that credit built.

STACEY VANEK-SMITH: Drive around downtown Sioux Falls, and you’ll see wide streets with brick sidewalks. Beautiful, turn-of-the-century architecture, some eclectic public art — like a giant, wire cowboy boot — and the Wells Fargo building, C&A, Bank of the West on my right, First National Bank on my left. And in my rear-view mirror, I can see First Bank and Trust. There are a lot of banks.

BILL JANKLOW: There never used to be, but there are a lot of banks now!

That’s Bill Janklow. He’s the former governor of South Dakota, and the man behind the bank boom. When he took office in the 70s, the country was in a recession and inflation was around 20 percent. But banks could only charge around 10 percent interest on loans and credit cards. That’s because most states had strict usury laws that capped interest rates. With inflation higher than interest rates, banks were losing money every time they made a loan. Credit was drying up.

JANKLOW: I was trying to steer the ship of state through this incredible economic mess, and I got a phone call one day from Citibank directly. Citibank was absolutely bleeding to death. So were all the other banking centers.

Why was Citibank — which is based in New York — calling the governor of South Dakota? Because South Dakota had just passed a law that eliminated caps on interest rates. And the Supreme Court had just ruled that banks could charge interest based on where their credit-card operations were headquartered, even if the bank’s main operations were somewhere else. Robert Manning is the author of “Credit Card Nation.”

ROBERT MANNING: So, if you moved your headquarters to another state, you could export the interest rate of that state to any customers.

Citibank relocated its credit-card operations to South Dakota, where it could charge cardholders any interest rate it wanted to. Janklow still has a memento from the deal.

JANKLOW: What we’re looking at now is a piece of ribbon, inter-dispersed on it are credit cards. And this was the groundbreaking on the first building for the credit-card operation with Citibank, which was a heck of a deal for my state.

And a heck of a deal for banks. Wells Fargo, HSBC, Target Card and dozens of others followed Citi to Sioux Falls and immediately jacked up the interest rates on their cards. Card applications went out by the millions and consumers, lured by easy money, embraced the credit-card culture.

CREDIT-CARD AD: If you need a card without going through credit checks, employment verifications or establishing a bank account…You should get one!…But I don’t have a bank account and my credit, you know…It doesn’t matter!

JIM SCHMIDT: And that employment opportunity spawned other businesses. And because of that you have incubating centers now that foster new, young businesses. The health-care industry has exploded. Our home builders are diversified.

But now, that growth may be threatened. Consumers are choking on debt and can’t pay their credit-card bills. Credit Card Nation’s Rob Manning says plastic is no longer a license to print money.

MANNING: This is the greatest crisis period in the history of the American credit-card industry. For the first time, banks are having trouble even selling their credit-card-backed securities, and the industry’s talking about default rates of now over 8 percent.

The industry is also bracing for credit-card reform next year that will reign in interest rates and fees. And that could mean hard times ahead for the town that plastic built.

RYSSDAL: Stacey spent a couple of days in Sioux Falls, so we will too. Tomorrow: what the credit crisis did to the city credit built.