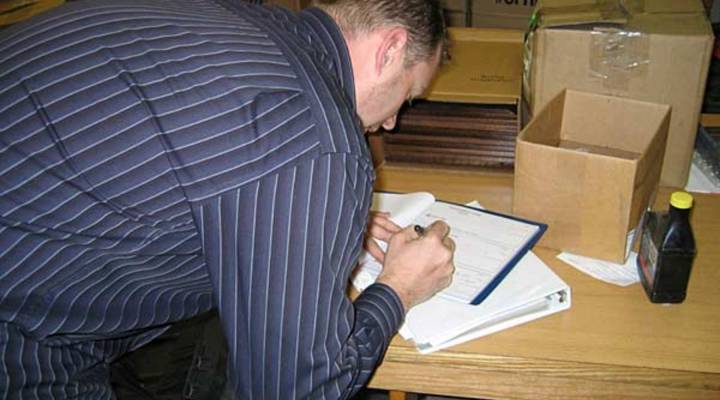 He’s not leaving any soldier behind

COPY
Patrick Sowers writes a $700 check at Fort Hood in Killeen, Texas, to help an Army private recently returned from Iraq get back to his family in Arizona. Tess Vigeland / Marketplace
Debt of Service: Personal Finance in the Military

He’s not leaving any soldier behind

Patrick Sowers writes a $700 check at Fort Hood in Killeen, Texas, to help an Army private recently returned from Iraq get back to his family in Arizona. Tess Vigeland / Marketplace
Listen Now

TESS VIGELAND: There are plenty of military-related charities that do put the bulk of their donations directly toward soldiers, sailors, airmen and Marines.

Patrick Sowers runs one of them.

Sowers is the founder and president of a Dallas-based nonprofit called Operation Once in a Lifetime. Last year the charity took in $50,000 in donations and helped, by his estimation, 5,000 soldiers.

I met up with him in Plano, Texas, where about a year ago he opened a resale store.

SOWERS: There’s resale centers for everything. So I was like, you know, there should be a resale center that benefits soldiers. I mean, if dogs and cats can have one, a soldier should have one as well.

The public can come in to the store and buy things. Soldiers can walk out with anything they want — for free.

Sowers is 32. He joined the Army in 1998 and spent four years on active duty, and another four in the reserves. Now he manages the maintenance department at a local car dealership.

The resale store is just one element of what’s become a far-reaching effort to provide soldiers with, well, whatever they need.

We hopped in his truck for a drive from Plano south to Fort Hood in Killeen. Sowers makes the trek several times a month.

VIGELAND: So what do we have in the truck today? What are we taking down to Fort Hood?

SOWERS: Linens, right. What happens is, when you go to Iraq and Afghanistan, if you’re a single soldier, you put everything in storage. Well, typically, you don’t even have access for that for two to three weeks.

So he’s delivering a little slice of home for the barracks. He’s also garnered tickets to the Dallas Mavericks for wounded soldiers. And he finds people with extra airline miles and uses them to fly soldiers home during holidays.

SOWERS: And one reason kinda why I started this was I went from making $30,000 a year as an E5 sergeant to, you know, started working in the auto industry and worked for Lexus. Back of my mind I didn’t think it’s really fair that I worked three times harder and put more on the line being in the military, but now I work half as hard and make three times more money.

Several times during the three-hour trip his phone rang with someone requesting help. A military wife whose car broke down on her way to visit her wounded husband. An Army recruiter in Cleveland, checking up on Cavaliers tickets for recruits in Ohio. The team donated a $6,000 suite.

SOWERS: No soldier would ever be able to afford to do something like that — ever!

We arrived at Fort Hood early afternoon. Several soldiers came out to unpack all those sheets and pillows from the truck.

Miguel Carrion: Of the things we have received from his support, from Operation Once in a Lifetime, just today we prepared 150 rooms. And in the next two days we’ll do another 300 rooms.

VIGELAND: So if you didn’t have this, what would soldiers — literally coming off the plane from Iraq…

CARRION: Literally, into a naked room and a naked bed.

And while we were talking, off in a corner Sowers was helping fulfill another need for Private Daniel Holmes, just back from a 15-month tour in Iraq.

DANIEL HOLMES: Thank you, very much.

The money went toward a U-Haul and plane tickets to get Holmes home to Arizona.

Before we parted ways, I asked Sergeant Sowers whether all this should be something the military takes care of on its own?

SOWERS: It doesn’t make me feel bad that the military’s not doing more. I think the military’s geared to try and help them as much as possible. But with all these unique situations, they’re just not going to be able to do all of it.