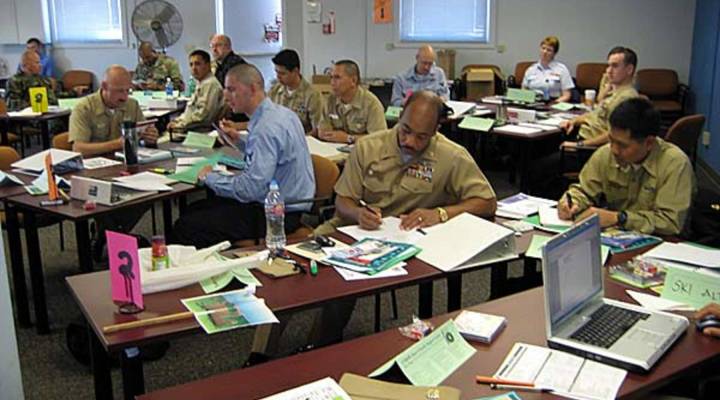 COPY
Members of the Navy, Marines and Coast Guard take classes to become command finance specialists. The Navy requires a finance specialist for every 75 sailors. Tess Vigeland / Marketplace
Debt of Service: Personal Finance in the Military

TESS VIGELAND: Last year in the Navy, 84 percent of the security clearances that were either revoked or denied happened because sailors were having financial problems. More than 28,000 sailors got emergency loans from the Navy’s relief society.

The military increasingly considers financial fitness as important as all the physical training required to be a sailor, soldier, airman or Marine. About three years ago the Navy ramped up a financial counseling service. We visited the base in San Diego to see how it works.

[Aboard the USS Peleliu]

The amphibious assault ship USS Peleliu returned from the Persian Gulf three months ago. When we boarded, it was docked at the sprawling Naval Shipyard in San Diego. Twenty-five-hundred sailors and Marines are stationed on the ship when it’s fully manned. And commanding officer Marcus Hitchcock needs them 100 percent focused.

MARCUS HITCHCOCK: This is 40,000 tons of steel, but it’s the people that make it come alive. So if the people aren’t healthy, mentally, physically, financially, then they’re just not ready to take the ship out to sea to do the job that they need to do. So the financial health of our sailors is absolutely critical to the readiness of this ship and to the Navy.

Colonel Major Joe Porath serves on the front line of that readiness effort. He’s a Navy command financial specialist, or CFS — an on-board money counselor. He’s also responsible for making sure helicopters and fighter jets get safely on and off the ship’s deck. Where there is, literally, no room for error.

. . . And the safety of every sailor and Marine on board this floating city. The Navy mandates one financial counselor for every 75 sailors. If only we had that in the civilian world.

Petty Officer Robert McGuire, who’s training to be a counselor, says it’s easy for service members to get in trouble early on.

ROBERT MCGUIRE: You get a lot of young people that have no education and training on finances, either in school or at home, and they have a steady paycheck. So by default they come into the fallacy that they always have money there, and then they don’t realize how much money they’re spending.

PORATH: The biggest thing that I see going on a cruise, you get to the Gulf, you get tax-free money. Then, when we get into San Diego, those people are spending that same money that they were trying to spend out there.

Up on the ship’s deck a group of sailors gets orders for the next day’s work. Twenty-two-year-old Petty Officer Third Class Chris Cline is among them, and he knows that spending pattern well. In 2007 he deployed on a months-long humanitarian mission.

CHRIS CLINE: Every time we’d stop at a port, drinks here, gifts here, just things I thought I needed that, really, 30 days from then or even a week from then, it was like, “OK, this isn’t really that cool anymore,” and you’d get rid of it.

Cline is what Senior Chief Porath calls a “client.” A few months ago Cline asked for help putting together a budget for his family. Now he’s putting money aside in the government’s thrift savings plan and he paid off all his credit cards.

Hope is exactly what Ed Olander wants the Command Financial Specialist program to provide. After all, he’s in charge of it.

Off ship, at the Fleet and Family Support Center in San Diego, 20-year Navy veteran Ed Olander is now teaching sailors how to be command financial specialists. He does some of the counseling himself, and says no one is immune from Money issues.

ED OLANDER: I’ve had everywhere from the youngest sailor new in the Navy, to I’ve had master chiefs with 28 years. I’ve had commanders in my office in financial problems.

Olander oversees weeklong training programs for new counselors. He brings in specialists from the mortgage industry, the credit card industry, and experts in how to talk to people about financial issues.

Instructor: Get them to evaluate the seriousness of their situation. . . .

As the seminar continued, Olander told us that part of the problem is a feeling of invincibility among service members.

OLANDER: Especially in the Navy, a lot of them are very technical jobs. And they think, “If I’m operating the engine of a nuclear submarine, I should be able to go buy a car. And, “I don’t need to read the contract because, why? they’re not going to rip me off.”

But, in fact, members of the military are frequently ripped off — from predatory lending to its evil twin, predatory retailing, where stores in military towns offer “special military financing” — at 30 percent interest.

Olander says, just like civilians, some servicemembers don’t know better. And others just don’t want to wait to get the things they want.

Command Chaplain Robert Thomas was among the more than two dozen sailors learning how to become financial specialists. He helps mobilize troops going to and coming back from sea. He says some sailors assume every detail of their finances will be taken care of while they’re deployes, and they show up on base without cash or even bank accounts. He says every one of them should go through what he called a financial stand-down.

ROBERT THOMAS: Every six months we have to be physically ready to do so many push-ups, so many sit-ups and run a mile-and-a-half and pass that. We need to have the same kind of standards from a financial perspective.

The educators and sailors we talked to said service members don’t necessarily have more financial problems than civilians. But the problems they do have are magnified by things like security clearances. And because they live and work as a team, one person’s financial issues become a problem for everyone.

Back on the USS Peleliu, Petty Officer Chris Cline shared his own success story. He says when he got back from deployment he wanted a new truck. But, because of the Navy’s financial program, he knew better than to walk onto the lot unprepared.

CLINE: And I used a lot of their tools, knowledge that they gave me to buy a vehicle. I had the check in my back pocket. I had the power over the salespeople at the car dealerships. I ended up getting a steal.

With 6 percent financing from the Navy credit union.