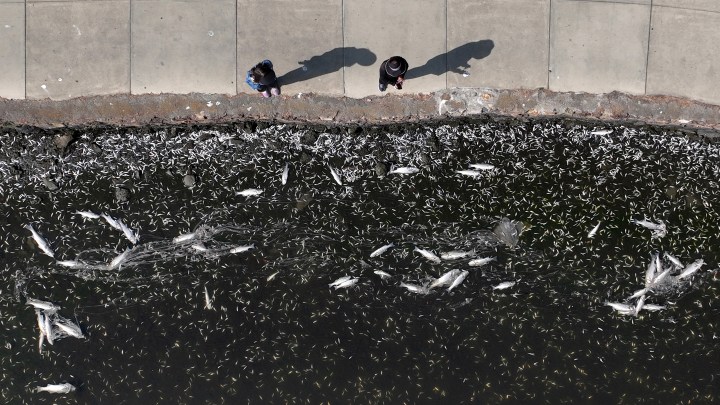 COPY
Hundreds of dead fish are seen floating in the waters of Lake Merritt, connected to the San Francisco Bay by an estuary, on Aug. 30. Justin Sullivan/Getty Images

Hundreds of dead fish are seen floating in the waters of Lake Merritt, connected to the San Francisco Bay by an estuary, on Aug. 30. Justin Sullivan/Getty Images
Listen Now

In late July, Mary Spicer noticed the water lapping around her kayak started to turn red. A few weeks later it was dark brown.

“All of a sudden the water, you could no longer see through the water,” Spicer said.

Spicer paddles several times a week on the San Francisco Bay. She has never seen a red tide or algal bloom like this summer’s event, that has left thousands of fish washed up on shores across the Bay Area.

“None of the marine people I know, the rowers, the paddlers, the sailors are comfortable with what’s happening right now,” she said.

An estuary connects the Bay to Lake Merritt a few miles inland in Oakland. As a group of people stare wide-eyed from the shore there, Sabrina Wicker plugs her nose and points to the surface of the water.

“I thought it was like leaves or something, but those are all fish of all different sizes floating dead,” Wicker said.

The sandy beach below her feet is a web of twisted tiny dead fish. In addition to the environmental, headlines about muddy waters and decaying fish are bad for tourism.

Fishermen say they’ve had guests cancel recreational charter fishing trips. “How widespread or how deep that is? Hard to tell,” Jeffris said.

The full brunt of financial impacts may not be known for many months. The red tide is likely driven by a combination of warmer water temperatures resulting from climate change and high nutrient levels in the water — specifically nitrogen and phosphorus, which algae love to eat.

“Unfortunately, we have not seen an algae bloom of this particular species of this magnitude in San Francisco Bay ever before that we know of,” said Eileen White, the executive officer for the Water Board San Francisco Bay Region. “When you flush the toilet every day, you’re flushing nutrients down and it arrives at the wastewater treatment plant.”

And those plants remove sewage, but most of them do not filter out nutrients before discharging into the bay. Fixing the problem will cost upwards of $12 billion, according to a study by the Bay Area Clean Water Agencies (BACWA), which represents wastewater treatment plants.

“We’re hoping that this crisis becomes an opportunity to go after some of the state and federal infrastructure funding that is available right now,” said Lorien Fono, executive director of BACWA.

Any remaining costs will be tacked onto residential sewage bills. In addition to upgrading filtering systems at treatment plants, communities can construct wetlands along shorelines. The soil and vegetation help remove nutrients.

“You get benefits of sea level rise protection, and you get the benefit of habitat enhancement,” Fono said.

Communities can also recycle treated wastewater by putting it on golf courses, farms or sports fields, which would in turn help the region become more drought resilient. All of these methods are expensive and can take five to 10 years to put in place. Plus, they hinge on a critical question that scientists are still trying to answer: What level of nutrients can the Bay handle?

“The only thing that is worse than a recurrence of this devastating algal bloom in the Bay is to spend billions and billions of dollars on reducing nutrients and have it not make a difference,” said Fono.

“I feel if we humans are playing a role in creating it,” she said, “then we really need to come up with solutions.”

Scientists say red tides are more likely to occur as the climate warms.