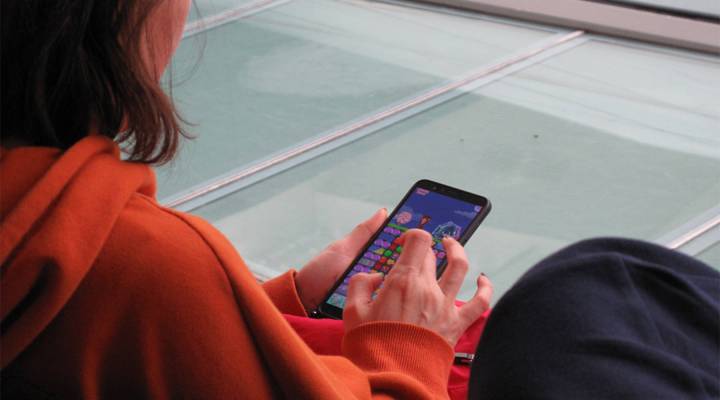 COPY
Hundreds of video game companies are fighting for the attention of cell phone users in China, where the video game market is worth more than $30 billion. Jennifer Pak/Marketplace

Hundreds of video game companies are fighting for the attention of cell phone users in China, where the video game market is worth more than $30 billion. Jennifer Pak/Marketplace
Listen Now

A fish tank sits prominently at game developer Link Joy’s office in Beijing. Chief executive Tommy Yuan was told by a friend that, to attract fortune, it is good feng shui to have fish and water in front of the window. “Water is gold, and gold is fortune,” Yuan explained. Good fortune may be part of the reason his firm is still operating today.

China’s government recently resumed approvals for new mobile video games after a months-long suspension. The regulatory standstill caused 41 percent of the top-listed video game companies’ revenues to drop in the first three quarters of 2018, according to local media.

Technology and video game giant Tencent reported a 32 percent profit drop in the fourth quarter of 2018, compared to the same period last year. U.S. and foreign companies are less exposed because they are still largely restricted from the $30 billion video game market in China, unless they find a local partner. The market restriction and regulatory hurdles are sticking points between the U.S. and China in ongoing trade negotiations.

Yuan said it is not smooth sailing for Chinese companies, either. He started his company in 2013, when the mobile games sector, in particular, experienced double digit growth — there was less government oversight back then. By 2015, encouraged by easy access to cheap credit, more than a dozen of his friends started businesses in the video game industry, too.

“It is like [a] gold rush. Everybody just went there because the money is there. Whether prepared or not, [people went in to] try their luck,” Yuan said.

CEO of game developer Link Joy Tommy Yuan said in fast-growing industries, the government will eventually want to regulate it.

In May 2016, the government started imposing tougher rules for companies seeking to publish mobile video games. The criteria for content are still unclear to Yuan. “They don’t have a rules list printed on paper,” he said.

However, after 15 years of developing video games for big firms and for his own company, he has figured out some big themes to avoid: content that is overly violent, pornographic, or anti-government. On top of that, there is a list of specifically banned terms, which Yuan said changes every year.

In his adventure game, Tiny Sailors, he was asked to cut out references to pirates. It surprised him. He scrubbed out the word from his game’s dialogue, replaced all skull and crossbones symbols with an “X” and re-submitted the game to regulators, only to be asked to make more changes.

Poster of Tiny Sailors game by developer Link Joy, who was asked by Chinese regulators to remove all references to pirates. The company scrubbed the word ‘pirate’ from the games’ dialogue and replaced all skull and bone symbols with an “X”.

“When we get permission for our games, we [go] back and forth five or six times. So, we modify a lot,” Yuan said. He said there was no way to dispute the official ruling. The content approval process can take between two and six months, which is a long time for a fast-moving market.

Then, at the end of March 2018, the authorities suddenly stopped granting approvals. “Every month [there were] rumors that [approvals] will [resume] next month,” he said. The regulatory pause came at a time when the industry was in a rough patch. Only three of Yuan’s friends who entered the video game industry are still in business.

Fewer new users and shifts in game platforms and revenue models led his friends’ small companies to collapse. One of them even sold his home, but still couldn’t save his business. “He killed himself,” Yuan said.

People pass the time playing on their cell phones while waiting for their train at Beijing South Railway station.

Chinese state media eventually said that the pause was due to a government restructuring of ministries. However, it is also because there have been negative media reports about children becoming addicted to mobile video games, and sometimes using their parents’ life savings to buy video game upgrades.

“The video game industry developed in a wild manner in the era of mobile internet. Many games have vulgar content or are copies of more popular games,”  said video games expert Dong Zhen. Zhen, who works for the consulting firm Analysys, said big players like Tencent and NetEase, who have cornered at least 70 percent of the video game market in China, supported the government enforcement of stricter controls because they wanted to weed out the small players.

There is also public pressure on officials to reign in the industry. “Children do not have good self-control and can easily get addicted to video games, and the screens are harmful to the eyes,” said a Beijing resident, Ms. Chen, who wanted to withhold her first name due to concern about official retaliation against her, even though she supports tighter government control over video games. Her grandson is only two years old, but Chen said he is always trying to play games on her cell phone.

Yuan said that while he expected stricter government rules, he did not anticipate the sudden suspension of game approvals last March. “Nobody heard anything [beforehand],” he said. “What happened in March shocked me.” Meanwhile, he turned his sights to overseas markets.

His firm published a game about surviving a zombie apocalypse, called “Survivor: Dangerzone.” It’s on Google Play, which is a platform blocked in China. Yuan is currently testing a different version of the game for the Japanese market.

Many video game firms are relieved that the government has started issuing approvals again. But game industry observer Guo Ling told the media outlet, Beijing News, that between 300 and 400 game companies have shut down as a result of the suspension. Yuan still has one game pending approval, but he does not know when it will come through.

“Doing business in a fast-increasing market is exciting but it is [also] very dangerous,” he said.