Layoffs leave mark on those left behind

Layoffs leave mark on those left behind

Kai Ryssdal:
Here’s today’s not-so-fun fact about the economy. According to the Department of Labor there were 2,100 mass layoff events last month.

A mass layoff, the government says, is 50 or more people at a single company losing their jobs. The grand total for October came to almost a quarter-million people getting pink-slipped.
Remember that doesn’t count Citigroup’s huge cuts from just last week.

Whether firings come in bunches or if they come one by one, it’s never fun to be on the receiving end. But it’s not too much better for those who’re left behind. From New York, Sally Herships has more.

Sally Herships:
What do you think is worse? Getting laid off, or dodging the axe? It’s a no-brainer right? Losing your job. Internet project manager Heather Flett used to agree. Then the dot-com bubble burst earlier this decade.

Heather Flett: I think I counted somewhere between 19 and 23 different rounds of layoffs.

Herships: So, wait a second, 23 rounds of layoffs?

At first, Flett says, the pink slippings at her dot-com were surprising and scary — something to be avoided at all costs. But things quickly got tough.

And the layoffs kept going on. The ax continued chopping for five years. And by the final rounds when most of the desks around her were empty, Flett had changed her mind. She wanted out.

Flett: The 17th and 18th, OK, this is not a surprise. You know, please make the pain stop.

If you feel stress, your body doesn’t care what you’re worried about. Your body just knows there’s a stressful situation out there. That’s according to psychologist Mitchell Marks.

Mitchell Marks: If you lie awake at night and can’t sleep because you’re worried about losing your job, that is as stress inducing as actually losing your job.

Marks teaches management at San Francisco State. He says downsizing seems irrational to employees. Good workers getting the boot for no good reason. And that, he says, can cause competition among the ranks. Employees pitted against their own supposed teammates.

Herships: Why do people stick around in these situations?

But can a bad job really be worse then no job? I met up with Chris Connor outside of his neighborhood grocery store. Until a few weeks ago a he was a retail exec — then he got laid off. Now he’s clipping coupons from the circular.

Chris Connor: The person who you thought you had a great rapport with and they just totally dumped you for no reason? That’s what getting laid off feels like.

Just like you’d think, Connor says the financial stress of being laid off is enormous. But Mitchell Marks of San Francisco State says Connor has a leg up. Unlike the workers stuck in a bad relationship, he can move on. He just has to work through some stuff.

Marks: So first there’s denial, “Oh, they’re going to get over it. They’re going to change. They can’t really be doing this.” Then there’s anger, you know, “How could these people do such a thing to other human beings?”

Connor: I no longer will ever walk into that building and feel like, Is today my last day? Am I going to get escorted out like a criminal today?” It’s over. It’s done.

Chris Connor is still looking for a job. But, it’s only been a few weeks. Dot-com survivor Heather Flett, after staring at the ax through 23 rounds of layoffs couldn’t take it anymore. She left. On her own. 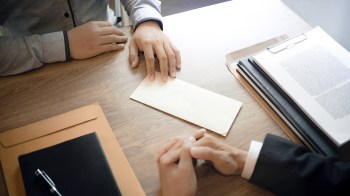