Scott Jagow: One reason stocks are up is that there’s still hope in Washington for a rescue package getting through Congress. For the second morning in a row, President Bush gave a statement to reporters:

President George W. Bush: This is a difficult vote for members of Congress. Many of them don’t like the fact that our economy has reached this point, and I understand that. But the reality is that we’re in an urgent situation, and the consequences will grow worse each day if we do not act.

Yesterday’s defeat in the House was only by a few votes, so perhaps this bill can be changed to appeal to more lawmakers. One idea being floated this morning is raising maximum amount of FDIC insurance on savings accounts. Right now, only $100,000 is insured. There’s talk of making it $250,000.

We’re joined by our correspondent Steve Henn in Washington. Steve, how would that help the situation?

Steve Henn: Well you know, Scott, you and I may not have $100,000 sitting in our bank account right now, but lots of small businesses, and you know, lots of wealthy individuals, have more than that. And they might need it to pay a quarterly tax bill they’re expecting, or they might need it to make payroll. And if they happen to bank at Wachovia or Washington Mutual in the last few months, they’ve been scared. You know, they’ve been looking at those accounts knowing that if those banks fail, they’d lose their money and they wouldn’t be able to meet their obligations. And remember, what we saw with Wachovia and WaMu was a lot of people withdrawing deposits. Turns out 63 percent of bank deposits are insured are under that cap, 37 percent aren’t. So if a bank’s in trouble, you know, you’re looking at roughly a third of the money on your books coming out that’s going to not do anything good for your balance sheets, and could actually push you closer and closer to insolvency.

Jagow: So the idea here is to lower the percentage of uninsured deposits.

Henn: That’s right, and give everybody a little bit more confidence that the bank they’re with is solid.

Jagow: Is there anything else on the table right now that might be included in the package?

Henn: Well one thing folks are talking about is dispersing this money a little differently. You know, it’s $700 billion in total, they were talking about making the first payment like $250 billion. That might come down a little bit, there might be more on the back end. The other thing that some people are talking about is changing accounting rules so banks actually value the worth of these mortgage-backed securities a little bit differently on their books. And some people think that might boost their balance sheets, at least temporarily, and ease the credit crisis.

Jagow: All right, we’ll see what happens in the next couple of days. Steve Henn in Washington. Thank you. 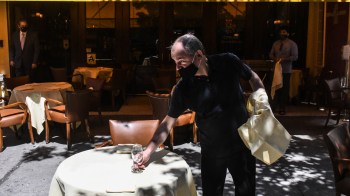