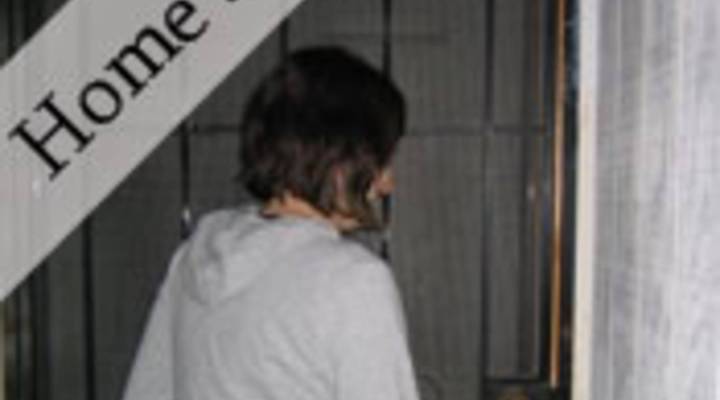 Nothing left to do but walk away

COPY
Joanna Goslin locks up her condo for the last time before a bank sale. Tess Vigeland

Nothing left to do but walk away

Joanna Goslin locks up her condo for the last time before a bank sale. Tess Vigeland
Listen Now

Tess Vigeland: So let’s take a look at foreclosure itself. Here’s what happens: the owner of the house can’t or doesn’t make the mortgage payment. After three to six months, the bank files a notice of default with the county. If there’s still no payment, the bank schedules an auction and sells the house.

Sounds pretty horrifying, doesn’t it? Foreclosure has always been the absolute last resort. You pay your mortgage even if you’re not paying any other bills, right?

But the math has turned. Today, people are deciding it’s actually in their financial interest to be mortgage deadbeats.

Maybe you’ve heard this term “jingle mail?” Homeowners just mail their keys to the bank and walk away. Apparently when tens of thousands of your fellow citizens are going through the same thing, it’s just easier to do.

Seth and Joanna Goslin paid a final visit to their former home a few weeks ago.

Vigeland: How long have you been out?

Seth Goslin: We’ve been out since September so…

They haven’t paid their mortgage since last summer. Now they’re in bankruptcy and foreclosure proceedings.

Vigeland: Lights are still on…

Joanna: Yeah, so not in our name, but I guess they didn’t cut it off.

We sat on the living room floor of their 1,200 square foot condo in Elk Grove, California, a suburb of Sacramento, the three of us and four walls.

Joanna: So, uh, this is it — downstairs.

Joanna: It does. It’s a little weird being here. This is my house, but it’s not really my house anymore.

Vigeland: So, where are you in the process now?

Joanna: Really any day we’ll get notice of the date for the court sale.

Joanna is 24 and a stay-at-home-mom. Seth is 33 and worked for a mortgage broker until he was laid off early last year. They have two daughters, four and two years old, and a newborn son.

The purchase price on the condo three years ago this month was $193,000. And now?

Vigeland: A hundred thousand dollars less than what you paid for this one?

Vigeland: And what do you owe on the condo?

The Goslins bought their home with what’s known as a 2/28 ARM — the interest rate is fixed for only the first two years, then adjusts up. They also did 100 percent financing — no down payment — but later, they refinanced into an even riskier mortgage called an option ARM. It allows borrowers to make payments that don’t even cover the interest on the loan. That’s how they ended up owing even more than their purchase price.

Joanna: I mean, we understood that it was a risk, but we sort of just assumed that it would kind of work out.

Vigeland: But it sounds like you knew what you were getting into. You understood your mortgage product, you don’t feel that it was sold to you in any fraudulent manner?

At the time of the refinancing, Seth says their home value had gone up 10 percent and they were counting on a new job in real estate for Joanna, but soon the condo’s value started to plummet and her career was sidetracked by a third pregnancy. They also think they might have gotten the mortgage with stated-income documents, but they’re not sure.

Joanna: So, we’re fuzzy on the details of our loan, which may be why we’re in foreclosure.

Vigeland: You seem awfully fine with this. For a lot of people, going through foreclosure and going through this whole process would be fairly traumatic.

Joanna: I think we realize that it’s a big deal and we don’t want to come across as sounding like, you know, “oh, let your house go; it’s no big deal,” but I think at the same time, we saw it, we weighed our options going into it and we knew that it was a risk.

Vigeland: So you actually contemplated the possibility of foreclosure when you were buying the condo?

Joanna: When you say it like that… I don’t think when we originally bought it.

Vigeland: How do you feel about the fact that you’re walking away from what was a responsibility on your part and there’s a lot of talk in Congress about, you know, well, should taxpayers rescue people who go into foreclosure?

Joanna: I guess I don’t really feel like Congress should bail us out. I feel like we should be the ones responsible for the consequences of that.

Vigeland: But what are the real consequences for you?

Joanna: That’s a good point. Maybe there should be more consequences.

What will happen? The Goslins will take a major hit to their credit scores and they’ll have to wait three years before they’re eligible for another home loan, but at this point, they’ll gladly exchange those for getting rid of their mortgage.

Seth: I think because it’s happening to so many, it doesn’t really feel like a stigma. It sort of feels like… there seems to be a lot of sympathy.

Joanna: It seems like a couple of years ago, everybody at cocktail parties talked about how much their home value had increased and now it’s, you know, how many bank-owned properties there are on their block.

And in fact, foreclosure signs litter the lawns throughout the condo complex. As the Goslins lock up for the last time, Seth says they’re looking forward to a fresh start in another state.

Vigeland: What are you going to do with your keys?

Joanna: Um, I guess we’ll keep them while it’s still in our name, until the bank takes over.

Vigeland: Well, good luck to both of you.

This weekend, the Goslins are starting over by moving to an apartment in a small coastal town in Oregon. They’re counting on this year’s tax refund and the federal stimulus check to get them by until Seth finds a job.

Meanwhile a bankruptcy court has cleared all of their debts off the books — except Joanna’s student loans — and the condo will go on the auction block in two weeks.