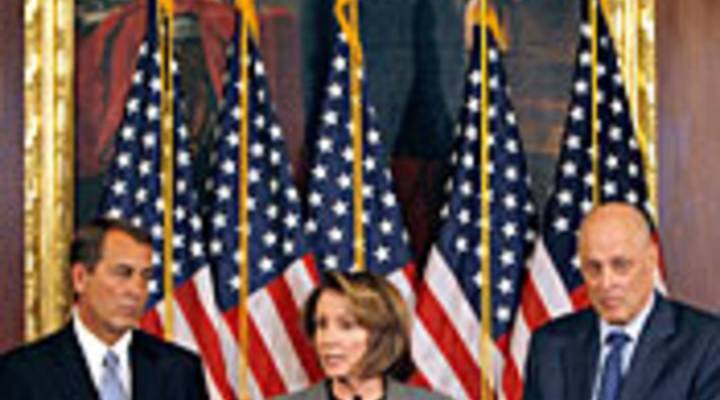 Stimulus aims to put cash in our pockets

Stimulus aims to put cash in our pockets

KAI RYSSDAL: Congressional Democrats and Treasury Secretary Henry Paulson did everything but hand out actual checks today. They lined up at a press conference to announce a deal for the much-ballyhooed economic stimulus package. John Q. Public can expect a hefty refund from the IRS this spring, and he’ll have an easier time getting a home loan.

Whether or not that helps avoid a recession . . . well, here’s Stacey Vanek-Smith.

STACEY VANEK-SMITH: House Speaker Nancy Pelosi made it very clear today who this stimulus package is supposed to help.

Working Stiffs who bank less than $75,000 a year would get up to $600 back from the tax man, including an additional $300 per child. Businesses would also get tax breaks, and the federal government would back home loans as high as $725,000, but economic consultant Gary Shilling says consumer spending isn’t the problem. It’s the banks that really need help.

GARY SHILLING: It’s the financial area where the problem lies, and I just don’t see these rebate checks making much difference to those deep and widespread financial problems.

Shilling says the package could even make things worse, by sending out the signal that Washington is panicky. That could hurt investor confidence, but not everybody agrees.

DAVID WYSS: I would like my check, and I think everybody else sort of feels the same way.

David Wyss is chief economist at Standard and Poor’s. He says it’s important that the government does what it can now, before things get worse.

DAVID WYSS: What you’re really doing is borrowing spending from the future and moving it to now, but that helps if you’re worried about a temporary dip in the economy. It’s sort of like filling a pothole. The dirt has to come from somewhere else, but that doesn’t mean you shouldn’t fill the pothole.

Wyss says Wall Street looks to the government to take action. He points out that the markets responded well to the Federal Reserve’s decision to cut interest rates earlier this week.