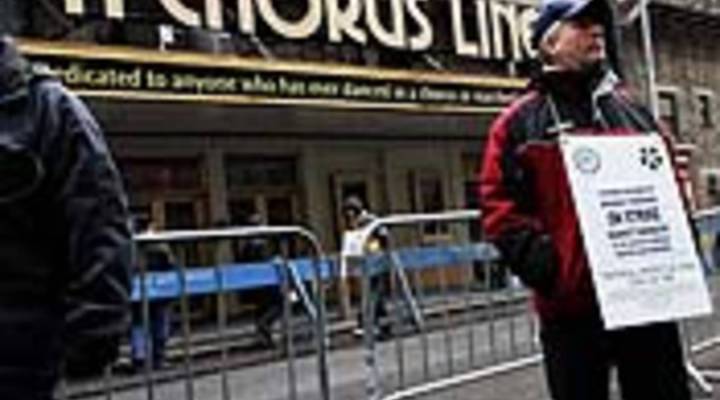 COPY
A Broadway stagehand pickets in front of "A Chorus Line" during a union strike. Stephen Chernin/Getty Images

A Broadway stagehand pickets in front of "A Chorus Line" during a union strike. Stephen Chernin/Getty Images
Listen Now

Doug Krizner: Thanksgiving is a big moneymaker for New York City. Tourists taking in Macy’s parade, all that shopping. It’s the second most lucrative time of the year for Broadway. But as the stagehand’s strike continues, It’s become hard-knock times for lots of local businesses. Stacey Vanek-Smith reports.

Stacey Vanek-Smith: The lights are off on Broadway, and that’s costing about $17 million every day, according to the League of American Theaters and Producers.

Tom Viola: The entire neighborhood is in really rough shape. And not just the Broadway shows and everybody whose out of work, but restaurants, hotels, cabs, everybody, ’cause the theater is such an important part of New York City.

Viola: Last year, the appeals raised about $3 million in the fall. What we’re losing here on Broadway is about $350,000 a week.

Viola says that loss will hit especially hard this year, with federal and foundation dollars on the decline. To try and make up the difference, Broadway Cares has launched a web page where the public can give.