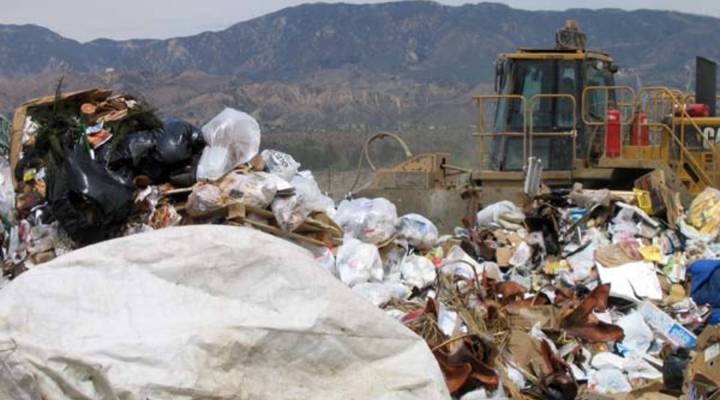 COPY
A bulldozer pushes one of the last loads of trash to be trucked into the Bradley landfill in Los Angeles County. Tess Vigeland

A bulldozer pushes one of the last loads of trash to be trucked into the Bradley landfill in Los Angeles County. Tess Vigeland
Listen Now

TESS VIGELAND: Have you ever looked at your trash? I mean, really looked? And thought about how much of your hard-earned money is resting in those garbage bins?

All the packaging you paid for… The leftovers you didn’t eat… The Kleenex you used during that awful flu bug… Our trash is one heaping symbol of our consumption habits. It’s gross, and some would argue unsustainable. In November Marketplace Money and other American Public Media programs will air a special series called “Consumed.” It’s all about whether our consumer culture is sustainable. As a preview of sorts, in a few minutes I’ll be issuing a challenge to you, dear listener. But before I do, we’re going to visit that faraway place where our trash goes. . . .

That far away place isn’t so far away after all. Back in May I visited the Bradley Landfill in Sun Valley, California, about 20 miles northwest of downtown Los Angeles in an industrial area flanked by neighborhoods. It was the day before the landfill was schedule to shut down … forever.

DOUG CORCORAN: A landfill is basically the end of the consumption process. It’s the end of the economic value or use for any of the products that people produced or bought.

That’s Doug Corcoran, my guide and a PR guy for Waste Management, which runs the Bradley facility. We stood on top of a 209-acre, 170-foot deep pile of trash… Some of it here since the landfill opened in 1959. It didn’t smell. And except for that morning’s fresh deliveries — and you can see photos of that on our website — it wasn’t a huge eyesore. Just a big mountain of dirt covering everything from sour cream tubs to dried flowers to empty boxes of Apple Jacks.

Corcoran: We’re on top of about 29 million tons of trash. Each of us generates about six pounds a day. Between what we buy and what we throw out and the refuse that comes off of processes to make the things we buy, it all comes out to about six pounds a day. You know you could look at it as one of these trucks that pick up trash in your neighborhood, they carry about eight to nine tons. So you can imagine the number of truckloads that have come in here to actually add up to 29 million tons.

Six pounds a day… Feeling guilty yet? Well technology at least has created a small silver lining. Bradley is one of the few modern landfills that collects methane emanating from its pile — generating power for 6,000 homes near the facility.

Corcoran: Where it used to be just trash in a hole? Now it’s trash decomposing, generating gas that we collect, that we send to generators that produce electricity that goes back to the homes where the trash actually originated in the first place. Although really it would be better if it never made it here, to be honest with you.

It would also be cheaper. Corcoran estimated it takes about 30 million bucks a year to run the landfill. That doesn’t count what it cost to pick up the trash, transfer stations and recycling — which is actually more expensive than just burying the trash. Now that Bradley was shutting down, I wondered where all that garbage would go.

Corcoran: In the short term, we see it as the tip of a potential crisis. The population of L.A. County and the surrounding counties continues to grow. With the growth in population, the amount of waste that needs to be handled grows. But when this landfill goes away, there’s not another one coming behind it to replace it. And so what you’re going to have is, potentially have, is a blockage in the system where you won’t be able to get rid of the waste that’s being produced and is getting to the curb. Ultimately, if it backs up far enough, it backs right up to your front door.

Lovely. Now nobody believes that’s what will happen. Well, actually, some do. But the issue of running out of places to put our trash is a real one. The Bradley trash will go to other area landfills. But even the largest garbage facility in the country, Puente Hills here in Los Angeles, is scheduled to close in six years. I asked Doug, whose business is trash, what he’s doing as a consumer to solve the garbage problem.

Corcoran: It’s kind of a joke at the house is that I don’t like buying things with lots of packaging. And I don’t like my kids doing that. Of course they’re grown now and they’re out on their own so hopefully they took those lessons with them. But my wife and I are really careful with that stuff. We make complete use of all the recycling that we have in our local service at our house.

Vigeland: What do you think it tells us about our consumer society that we’re at the point where we’re running out of places to put our trash?

Corcoran: Well, I think what it says is that we gotta do some better planning. We’ve got to figure out how to use and throw away less stuff. Look out in the future and imagine what is it you want to see out of our communities and what around us. What sort of industrrial and residential planning will go together. And if we don’t look at it that way, we’re going to find that instead of a landfill, there’ll be something else and people won’t want that either and, you know, it’s just sort of a comprehensive re-look at the way we live.

So, let’s do a re-look. Think you know how much trash you generate? Think you’re a good recycler? Well starting this weekend, I’ll be carrying my household and office trash around with me 24-7. Oh, yeah. . . . For the next two weeks I’ll be finding out exactly how much trash I generate and what kind of recycler I am. And I invite you to join me. Doug Corcoran says he will. The idea here is to see if we can get to zero waste by the end of two weeks. I have my doubts.

I’ll be keeping an online diary of the experience. You can check it out by going to marketplace.org and clicking on the link that says “Sustainability.” We’ll also have photos and postings from folks who join the challenge.