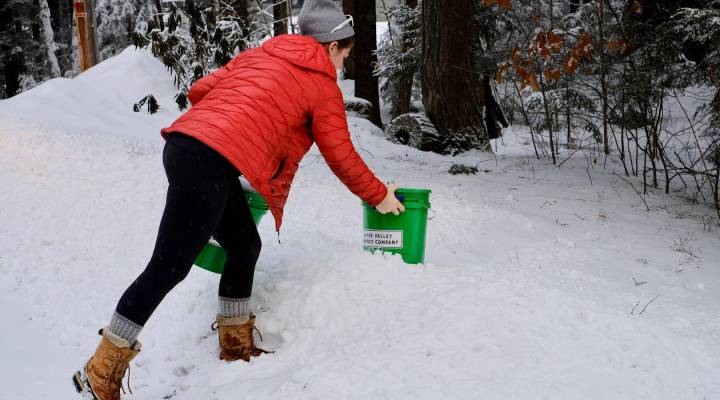 With her MBA in hand, Jessica Saturley-Hall knew she wanted to start her own business, and she got hooked on the concept of compost. She knew that food scraps produce significantly more methane, a greenhouse gas, when tossed in a landfill, rather than breaking down on their own. So she wondered, what if you could somehow reward people for separating their food waste from their trash?

At first, she thought about the idea of somehow paying people for their compost. She ran a host of financial models, looked at it every which way, but couldn’t come up with a solution.

Then, she decided to take a step back, asking if people were even interested in composting to begin with. If so, she thought, maybe the reward didn’t need to be so high.

She looked at surveys nationally, and did some locally in western New Hampshire and neighboring Vermont. She found that about 65 percent of people were willing to compost if it wasn’t too hard and didn’t cost them more than they’re currently paying to get rid of their waste. That figure struck her as high. Sixty-five percent of people, she thought, could be a customer base.

While cities across the country are launching municipal composting programs, offering to pick up food scraps alongside standard trash and recycling, the same programs don’t exist in many rural and suburban areas. But, as Saturley-Hall and others are finding, that doesn’t mean there isn’t demand.

Saturley-Hall started her business, the Upper Valley Compost Company, about six months ago. She offers two services. She charges $20 per month for weekly curbside pickup, where she takes a bucket full of food scraps including meat and dairy, and leaves a fresh bucket in its place. For half that, customers can drop off their own buckets at a local grocery store.

Just like many trash collectors, Saturley-Hall doesn’t break down the waste herself. She pays to drop it off at other facilities. But the model’s working — she’s already at a point where she’s considering hiring her first employee to keep up with demand.

Weekly trash pickup in her area of New Hampshire costs about $45 per month, more than double the Upper Valley Compost Company’s price for curbside pick-up. Some of Saturley-Hall’s customers are starting to skip their trash service and bring their waste to the dump themselves. Now that there’s no food waste rotting in their garbage, they don’t have to go very often.

Plus, some of Saturley-Hall’s customers had been trying to compost on their land, but were tired of attracting animals, most notably bears. Dan Collison, one of her customers, said he even saw a bear cub once trying to pry the lid off his compost container in his backyard.

Community-scale composting businesses are increasingly cropping up, according to Brenda Platt, who’s studied composting nationally with the Institute for Local Self-Reliance, a Washington, D.C. based non-profit that promotes economic and environmental sustainability at the local scale. “Food waste has gotten so much attention in the last few years,” she said.

More and more people are realizing the benefits of compost, she said, and some states are even starting to require food scraps be separated. That’s driving new business and innovation.

Saturley-Hall’s now wondering whether she could market her service anywhere and contract with local drivers who could be assigned customers and a route. Or, in startup speak: “create a technology that allows anybody with a car to be a hauler.”

And there’s plenty of food waste that needs to be disposed of — the Environmental Protection Agency says more food is thrown out in everyday trash than any other single material. The agency has set a goal to reduce that waste by half over the next 12 years.