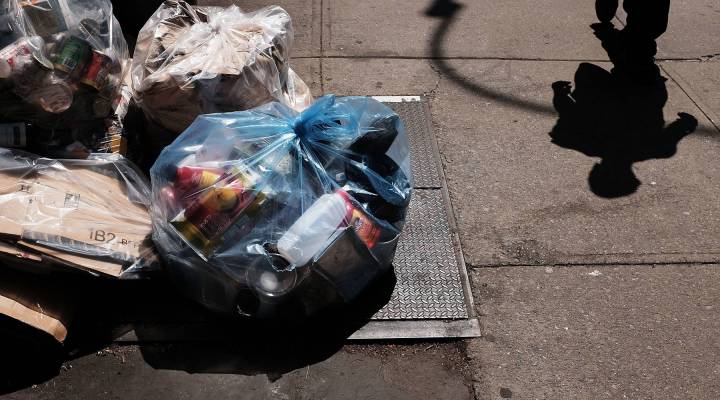 COPY
One idea to get more people recycling in New York is to give them bags with a bar code on it that would attribute the load to a particular apartment. Above, bags of recycling are piled on a Manhattan street. Spencer Platt / Getty Images

One idea to get more people recycling in New York is to give them bags with a bar code on it that would attribute the load to a particular apartment. Above, bags of recycling are piled on a Manhattan street. Spencer Platt / Getty Images
Listen Now

New York is a city of 8.5 million people, and that many people produce a lot of trash. The city spends plenty of money getting its garbage into landfill, and it would very much like to change that. New Yorkers pay for garbage disposal through their taxes, so they don’t really see the cost spelled out in so many figures the way a lot of other Americans do.

But that may be about to change.

The city’s Sanitation Department says New Yorkers only recycle 17 percent of their household waste on average. Rhea Eunjooin is originally from South Korea, where recycling laws are quite strict. But she admitted that here in New York, if she’s feeling lazy or in a hurry, she just throws everything in the trash.

“I should recycle better,” she said.

The low level of recycling in the city is a problem, because carting all that trash to landfills takes a lot of resources. Kathryn Garcia, New York City sanitation commissioner, said it costs the city “about $300 million a year for our final disposal.”

Local landfills have filled up, so New Yorkers’ garbage gets hauled upstate and to states as far away as Virginia and South Carolina that have agreed to accept it for a fee. Which is why the city is working with a Michigan firm to come up with a plan that might persuade New Yorkers to recycle and compost more.

Details of the plan have yet to be finalized, but looking at what other cities have done is helpful, said Antonio Reynoso, a New York City councilman from Brooklyn. He chairs the council’s Committee on Sanitation and Solid Waste Management.

“What we’ve known always works, no matter where you are, is … either incentivizing or fining. One or the other always works.” He said the city would prefer to use a carrot rather than a stick.

It is hard to get people to change their habits. The city is rolling out composting in more neighborhoods because much of the waste is food. About a quarter of the city’s residents can compost at the moment.

Garcia said the Sanitation Department has noticed high participation rates among immigrants from several Asian countries in particular. But not everyone who can compost does. In my Brooklyn apartment building the compost bin in the basement is rarely half full. The ick factor and the effort of taking chicken bones and soggy vegetables downstairs seems too much for most people.

There’s also the question of how you make a plan like this, where each household is held responsible for its output, work in a city where two-thirds of the residents are renters.

“Technology may be giving us ways to do this more accurately,” said Nicole Gelinas, a senior fellow at the Manhattan Institute. “It should be revisited that people could be given bags with bar codes within their building, or have a sticker with their apartment number in the building.” A sticker you could scan so that load is attributed to a particular apartment.

Reynoso said any new garbage plan will cause some people to grumble. But New Yorkers may be more upset if nothing changes.

“The thing here is that your taxes are going to continue to go up constantly so long as we don’t do something about the way we handle trash,” he said. “It might be the most expensive thing we do in the city of New York in 20, 30 years.”

Half a million people have moved to the city in the last 10 years and more are coming. The population is expected to hit 9 million by 2040.