BOB MOON: Into every federal budget, a little rain must fall.

In this case, about $38 million worth of rain. That’s the estimated cost of repairs to seven missile silos that were under construction in Alaska last summer.

There was an unusual amount of rainfall that waterlogged the electronics, and fixing that is part of the Pentagon’s $10 billon request for the next phase of the nation’s missile defense system.

A House subcommittee meets today to consider the funding.

Now, despite the flooded silos, the same construction company, Boeing, has been given another contract to build more of them. And that’s got government watchdog Nick Schwellenbach at the Project on Government Oversight wondering why.

NICK SCHWELLENBACH: You’ve got to question the decision to reward them a $100 million contract to build a new missile field when the ones they were building didn’t last very long. These silos are supposed to last for decades, they’re not cheap. So you would think they would build these silos to withstand some rain, so hopefully these next fields will be able to deal with a little bit of rain.

The Missile Defense Agency says the flooding was due to “unprecedented rainfall” that couldn’t have been anticipated and the Pentagon statement clears Boeing of any fault. 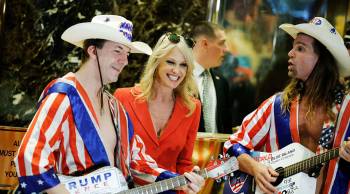 The echo chamber and Trump’s circle of advisors