KAI RYSSDAL: What’re you going to do this weekend? A couple of errands maybe. Watch some TV. Pretty standard Saturday fare, I’d imagine. The sabbath for observant Jews, though, is different. Nothing that’s considered work in a very broad definition.

No writing with indelible ink. No operating electrical switches or machinery. That puts phones, doorbells, even coffeemakers off-limits. But some Israeli rabbis are making machines to keep the faithful inside the letter, and the spirit, of religious law.

SHIA LEVITT: Tal Edensberg has been having a problem with his refrigerator. It’s not broken, though. His problem is actually the opposite. He’s worried that when he opens or closes the doors on the sabbath, he might inadvertently set off lights or activate sensors that turn on the cooling system.

TAL EDENSBERG: The fridge doesn’t have a special device to prevent the motor from working on the sabbath. So in what way can I open it and how can I use it on Saturday?

The Institute of Science, Technology and Religious Law gets more than 100 phone calls and drop-ins each month from people like Edensberg all over the world. Each has a question about how to apply religious law to the modern technology in their lives.

At the Institute’s Jerusalem office, a team of engineers and rabbis works to design devices that won’t break sabbath laws. In one room, an automatic water heater sits beside the prototype of a mechanical wheelchair. The room is crowded with appliances. It’s almost like a mini-museum.

Rabbi Shmuel Strauss picks up a special Shabbat phone with holes on each button on the dialer. Instead of pressing the button, you put a peg into the hole.

He says this Shabbat device isn’t for everyday use in homes, but for emergency use only. The phone uses a principle called gramma, or indirect action. When you turn something on indirectly there’s often a computer processor that checks the position of the peg or switch every few seconds. When it senses that something has changed, it completes the task — dials the number or turns on the device. So the Shabbat phone user is not technically dialing, not technically doing the work.

STRAUSS: Cynical people who come in say “Gee, that’s great, the Almighty said keep Shabbat and you guys are finding ways around it.”

Strauss says the Torah also commands its followers to enjoy the sabbath. He and his colleagues have spent years studying what they say are the Torah’s intentional loopholes — technicalities built into religious law that can help maintain health, security, and quality of life.

STRAUSS: What we do here at the institute is investigate the principles and see what new options are available in terms of coping with exceptional circumstances.

They’ve even gotten some businesses on board to sell Shabbat products. Israeli company Ralco paid the institute to develop Shabbat-compliant refrigerators. They’ve now embedded the Shabbat control function into their newer model. At a shopping mall outside Tel Aviv, CEO Yaron Ruziak drops in on a store that sells the product. He says he’s having a hard time getting the religious community to take notice.

YARON RUZIAK: The Orthodox market is not responding to typical business actions. They don’t watch TV. They don’t read the newspapers that we read. They have their own logic, which, for the last 20 years I’m trying to figure out. And I have not made that much success yet.

Most of the sales come from nonreligious people who just need a fridge. They even got the blessing of Israel’s chief rabbi, but it still hasn’t helped.

RUZIAK: Although we’re doing the best to make a perfect solution, it doesn’t mean that the customers approve, appreciate or accept it.

As for the Shabbat phones, Strauss says the institute sells them directly to the public for $300 each — but they don’t advertise. He says people who need the phones eventually find their way to the institute’s door. 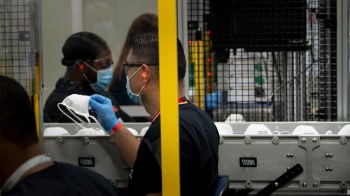