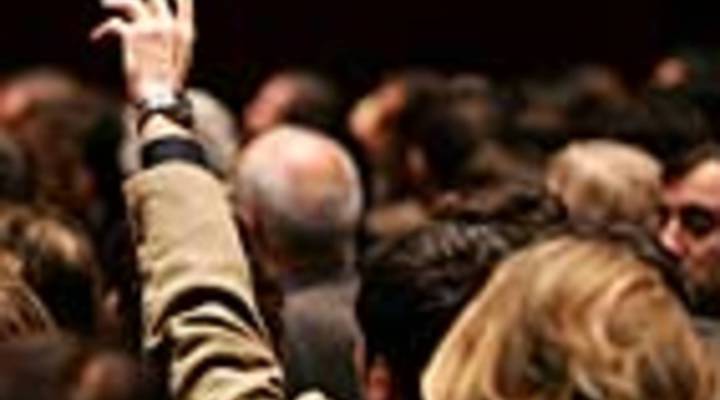 Putting a price tag on a Picasso

A man bids on a work of art inside the auction house Christie's during the post-war and contemporary art sale Nov. 15, 2006 in New York City. Spencer Platt, Getty Images

Putting a price tag on a Picasso

A man bids on a work of art inside the auction house Christie's during the post-war and contemporary art sale Nov. 15, 2006 in New York City. Spencer Platt, Getty Images

KAI RYSSDAL: The 12th annual Los Angeles Art Show runs through this weekend. People will be seeing thousands of works from historical to contemporary. And from paintings and drawings to video and sculpture. Buying lots of them, too. Fine art’s been selling like mad lately. Raked in record profits last year. But for most of us, arriving at a monetary value for something as subjective as art is a mysterious thing. So we sent Marketplace’s Stacey Vanek Smith to find out just how you put a price-tag on a Picasso.

STACEY VANEK SMITH: The word “priceless” gets thrown around a lot when people talk about Rembrant and Degas. But for Paul Provost, “priceless” just isn’t in the lexicon. He’s with Christie’s art auction house in New York. It’s pretty much built a business on pricing the priceless. Provost says from Pollock to Picasso, there are concrete elements that come into play when placing a value on art.

PAUL PROVOST: Provenance, provenance is a fancy art world word for the history of ownership. You also want to know about the quality. Quality’s a sense of whether an object is really a great object or just a mediocre object. Condition. You can imagine that something that’s in good condition is going to be worth more than something that’s in poor condition.

Eileen Kinsella is the editor of The Artnewsletter. She’s been tracking auction-house profits for years. She says there’s no doubt about it — market forces are at work in the art world.

EILEEN KINSELLA: I’d say the primary factor is the creation of a lot of new wealth. A lot of younger collectors that have gotten into the contemporary market. At the same time, you have definitely a decline in the number of great impressionists and modern masterpieces that are available. There’s really not a lot coming on the market.

Ah, supply and demand. New wealth in China, India and Russia means more buyers for a limited number of old masters. But it’s not just Matisses and Manets. Art prices have risen across the board. Kinsella says that’s pure Wall Street, too. As the market has gotten more competitive, buyers have gotten more open-minded.

KINSELLA: Years ago, you know, there was the idea you don’t buy late Picassos. That’s not the case anymore. Because people realize that you have to work with what’s out there, if you want to acquire good works of art.

Auction houses play their role, too. When they set preliminary prices for auction, they have to determine what the market will bear.

Christie’s Paul Provost says when Ronald Lauder bought Gustav Klimt’s portrait of Adele for a record-setting $135 million, it became a new benchmark for the whole market.

PROVOST: Everyone in that saleroom really had an understanding that the marketplace had shifted a little bit. And you can feel that. It really is the place where the market is made.

But auction houses aren’t the only ones that set prices. Private galleries do it, too.

At the Frank Lloyd gallery of ceramic art in Santa Monica, California, curator Frank Lloyd says when he puts a price tag on a piece of modern or contemporary art, something visceral comes into play.

FRANK LLOYD: It’s kind of a compendium of your experience of other artworks. And an emotional response to the formal elements or to the emotional content of an artwork.

But what if you’re trying to figure out a fair price for a work by an artist no one’s ever heard of before?

Goldman says determining a fair price for a piece of unfamiliar art is not as intimidating as it sounds. It’s a bit like judging the quality of a fine wine. Once the palette has been finely tuned, the quality becomes evident.

So it seems there is an art to pricing art after all.