A domino theory for capitalism?

A domino theory for capitalism?

KAI RYSSDAL: Trade ministers from countries along the Pacific Rim are meeting this week in Hanoi. Their first order of business today was to reject an American proposal to create a Pacific Rim free-trade area.

President Bush will make his appearance in Vietnam later this week. He’s likely to hear a lot of talk about reviving something called the Doha round of world trade talks. But the President’s visit will probably have a sour note to it. Earlier this week, Congress rejected a bill normalizing trade relations with Hanoi.

The reason, says commentator Robert Reich, rests in the nature of capitalism itself.

ROBERT REICH: Four decades ago, American policymakers clung to what was then known as the domino theory of Communism. Unless the United States propped up South Vietnam, it was assumed, all of Indochina would become Communist. Tens of thousands of Americans died in that war before America got out and let the dominoes fall where they may.

But then a strange thing happened. Soviet Communism disappeared. China became the fastest-growing, big capitalist nation in the world. And Vietnam became one of the hottest markets in Southeast Asia. The real domino turned out not to be Communism, but capitalism.

Yet the capitalist domino seems almost as threatening to America today as the Communist one was 40 years ago. This week, Republican leaders couldn’t get the votes they needed to give Vietnam permanent normal trade relations with the United States.

Talk about shooting ourselves in the feet. Early next year, as part of its entry into the World Trade Organization, Vietnam will reduce tariffs on foreign goods and open its telecom and financial services sectors to foreign investment. But as things now stand, America won’t benefit from these measures because Congress won’t normalize trade relations with Vietnam.

Some right-wingers still regard Vietnam as a menace. One Republican congressman said America shouldn’t trade with its mortal enemies. Republicans from textile-producing states don’t want cheap fabrics from Vietnam. A majority of House Democrats think Vietnam’s labor standards are inadequate.

Congress’s distrust extends beyond Vietnam. Trade bills now pending with several poor countries in Africa, Asia and Latin America are also in jeopardy. And many of the newly elected members of Congress campaigned agaisnt free trade. Whether it’s a renewed fear of foreigners, or fear of job losses to them, America seems to be turning inward.

This nation may be on the brink of a new Cold War, with the enemy this time not global Communism but global capitalism.

RYSSDAL: Robert Reich was Secretary of Labor for President Clinton. He’s now a professor of public policy at the University of California-Berkeley. 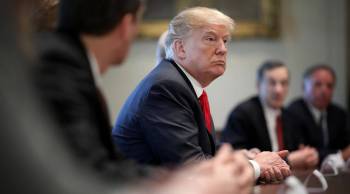