SCOTT JAGOW: Folks in Congress are off this week for a Memorial Day break, no doubt visiting the family and the constituents. I’m sure they’re gonna get an earful about immigration while they’re back home. The House and Senate are trying to reconcile two bills that are radically different. And they’ll be hearing from a group of bedfellows lobbying for the guest worker program. Here’s John Dimsdale:

JOHN DIMSDALE: The National Immigration Forum includes restaurant owners and unionized hotel workers. Other allies: the US Chamber of Commerce, the left-leaning Center for American Progress and the free-market think tank Manhattan Institute.

All these groups favor immigration reforms closer to the Senate version, which offers the prospect of citizenship for undocumented immigrants who’ve been in the US more than five years. The House bill has no guest worker program and makes illegal immigration a felony.

The Immigration Forum’s Frank Sharry thinks the momentum is turning in the Senate’s favor.

FRANK SHARRY: It is possible to imagine a bipartisan majority in the House of Representatives supporting a comprehensive bill that is in line with the Senate bill.

But House Republican leaders promise to defeat any proposal that includes amnesty for immigrants who have crossed the border illegally. 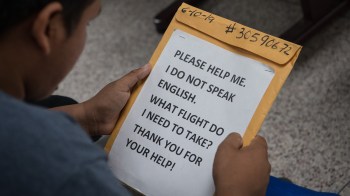