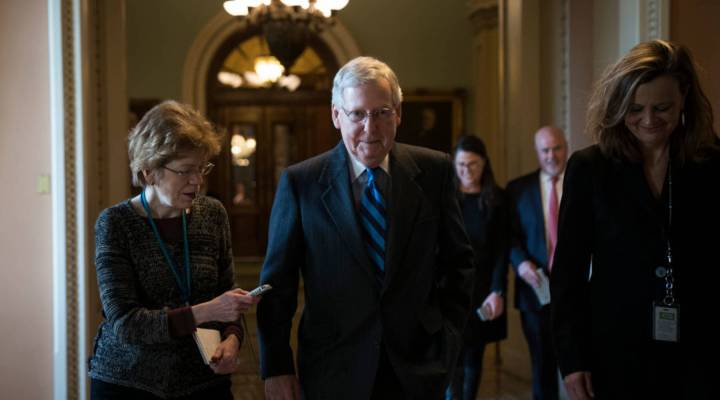 WASHINGTON (AP) — The government shutdown is set to sow more disruption and political peril Monday after the Senate inched closer but ultimately fell short of an agreement that would have reopened federal agencies before the beginning of the workweek.

Senate Majority Leader Mitch McConnell and Democratic leader Chuck Schumer said negotiations kept going late into the night, with a vote to break a Democratic filibuster on a short-term funding bill scheduled for noon Monday. Under the proposal taking shape, Democrats would agree to a three-week spending measure — until Feb. 8 — in return for a commitment from the Republican leadership in the Senate to address immigration policy and other pressing legislative matters in the coming weeks.

But Democrats appeared to be holding out for a firmer commitment from McConnell. “We have yet to reach an agreement on a path forward,” Schumer said late Sunday.

McConnell’s comments followed hours of behind-the-scenes talks between the leaders and rank-and-file lawmakers over how to end the display of legislative dysfunction, which began Friday at midnight after Democrats blocked a temporary spending measure. Democrats have sought to use the spending bill to win concessions, including protections for roughly 700,000 younger immigrants brought illegally to the U.S. as children.

Republicans have appeared increasingly confident that Democrats were bearing the brunt of criticism for the shutdown and that they would ultimately buckle. The White House and GOP leaders said they would not negotiate with Democrats on immigration until the government is reopened.

There were indications Sunday that Democratic resolve was beginning to waver, with growing worries that a prolonged shutdown could prove to be an electoral headache for the party just as it has grown more confident about prospects in November.

Although they initially dug in on a demand for an immigration deal, Democrats had shifted to blaming the shutdown on the incompetence of Republicans and President Donald Trump, seeming sensitive to being seen by voters as willing to tie up government operations over their big to protect immigrants.

Sunday morning on Twitter, he called on the GOP-controlled Senate to consider deploying the “nuclear option” — changing Senate rules to end the filibuster — and reopen the government with a simple majority.

McConnell has dismissed that option, saying Republicans will welcome the filibuster when they return to being the Senate minority. The White House didn’t immediately respond to McConnell’s comments.

Democrats are facing intense pressure from their base to solve the issue over the young immigrants, and they are skeptical of Republicans’ credibility when offering to take up the issue. Whether Trump would back the emerging plan or any later proposal on immigration is an open question. Even if the Senate voted on an immigration proposal, its prospects in the House would be grim.

Throughout the day there were few outward signs of progress, as lawmakers took turns delivering animated speeches to near empty chambers to explain why the other party is to blame. McConnell and Schumer met off the Senate floor in the early evening, as many in quiet Capitol offices flipped their television screens to playoff football games.

Lawmakers were mindful that the political stakes would soar Monday morning, when thousands of federal workers would be told to stay home or, in many cases, work without pay. What was still a weekend burst of Washington dysfunction could spiral into a broader crisis with political consequences in November’s midterm elections.

That threat prompted a bipartisan group of Senate moderates to huddle for a second day Sunday in hopes of crafting a plan to reopen the government. The group was set to meet again Monday morning.

The emerging approach found advocates in South Carolina Sen. Lindsey Graham, who has been trying to broker an immigration deal, and Kentucky Sen. Rand Paul, both Republicans who rejected an earlier short-term proposal. Arizona Sen. Jeff Flake, another previous no-vote, announced he would vote in favor of reopening the government Monday.

Graham said no deal had been reached by the moderate group because Democrats were not yet on board. “To my Democratic friends, don’t overplay your hand,” he told reporters. “A government shutdown is not a good way to get an outcome legislatively.”

The vote Monday will prove to be a test of unity and resolve among Democrats. Five Democrats from states won by Trump broke ranks in a vote Friday. The measure gained 50 votes to proceed to 49 against, but 60 were needed to break a Democratic filibuster.