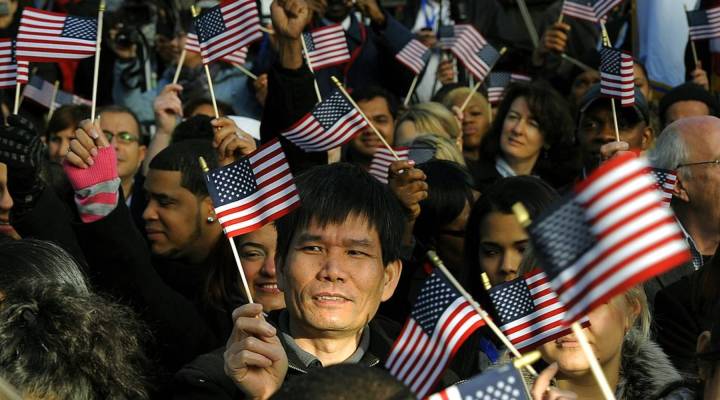 Candidates for U.S. citizenship wave flags before being sworn in during a naturalization ceremony on Liberty Island in 2011. TIMOTHY A. CLARY/AFP/Getty Images
Make Me Smart With Kai and Molly

Candidates for U.S. citizenship wave flags before being sworn in during a naturalization ceremony on Liberty Island in 2011. TIMOTHY A. CLARY/AFP/Getty Images

In the run-up to Super Tuesday, when Sen. Bernie Sanders was still an insurgent candidate and President Donald Trump was just one of a dozen or so GOP hopefuls, we called up a bunch of experts to ask how the themes of the campaign were manifesting in their states. Our conversation with economist Ray Perryman sticks out. At the time, he estimated as much as 10 percent of Texas’ workforce was made up of immigrants who entered the country illegally.

“If we were to suddenly have mass deportations and an inability to fill those positions, it would be a big dislocation to the state economy,” he said. “The bottom line is, I don’t think that economic reality resonates in the dialogue in this election.”

A year later, with bids underway on Trump’s proposed border wall and a second executive order restricting travel on the books, we’re still seeing that same economic disconnect. Reasonable people can and should debate how the White House’s immigration policies reflect American values and how effective they’ll be at keeping the country safe. But the economic context is important.

On this week’s episode of “Make Me Smart with Kai and Molly,” we looked back at this paper from the George W. Bush Institute. Author Pia Orrenius notes that for most of the Obama administration, more Mexican immigrants left the U.S. than migrated here.

“Against this backdrop of slowing immigration, it’s surprising that presidential politics are heating up around this issue,” she wrote. Immigrants who enter the country illegally from Mexico and elsewhere pay nearly $11.8 billion in taxes, according to a new report from the Institute on Taxation and Economic Policy think tank.

Better instead to think of immigration as a disruption like industrialization, she said: There are winners and losers, but an overall benefit.

One example: Immigrants raise the gross domestic product and enjoy higher wages, while driving down the pay of workers they compete with. You hear about that argument a lot. But that inflow of workers, sometimes to places that don’t have enough of them, creates more jobs and higher wages for native-born workers. More agriculture workers need more equipment, more doctors need more pharmaceutical reps, cheaper work means lower costs and so on.

So it’s a small boost but a broad redistribution of wealth. It has a name, coined by Harvard economist George J. Borjas two decades ago: “immigration surplus.”

“Immigration changes how the economic pie is sliced up,” Borjas wrote in The Atlantic in 1996. “This fact goes a long way toward explaining why the debate over how many and what kinds of immigrants to admit is best viewed as a tug-of-war between those who gain from immigration and those who lose from it.”

Today, the makeup of America’s workforce is quite different. New projections from Pew show that for the first time in decades, the number of American-born workers with American parents is dropping. Instead, immigrants and the children of immigrants will drive labor force growth for the next two decades, according to Pew. Without immigrants, the country will be down 18 million workers by 2035.

Then there’s the issue of where those workers are. As Molly pointed out during this week’s show, Silicon Valley hires many, many high-skill immigrant workers, and it’s been pushing to hire more. Earlier this year we traveled up to Washington to see the issue firsthand. Michael Schutzler, CEO of the Washington Technology Industry Association, told us tech and ag are “strange bedfellows,” trying to secure more visas for the immigrant workers they rely on.

“When I speak to my counterparts in the agricultural side, we see the world the same way,” he said. “This is a world of abundance. This is a world about creation. The immigrant workforce creates opportunity sets for the domestic workforce. It doesn’t take it away, it actually creates it.”