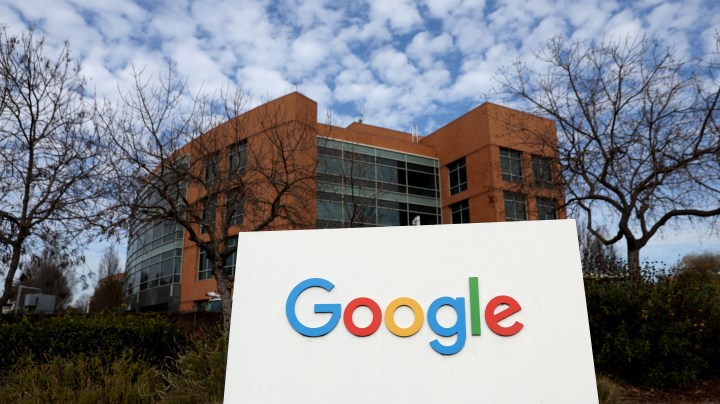 COPY
“There’s a variety of exclusive agreements for Google to be the default search engine, and that has foreclosed competitors from offering their products instead,” says attorney Charlotte Slaiman. Justin Sullivan/Getty Images

“There’s a variety of exclusive agreements for Google to be the default search engine, and that has foreclosed competitors from offering their products instead,” says attorney Charlotte Slaiman. Justin Sullivan/Getty Images
Listen Now

The Department of Justice’s landmark antitrust case against Google, originally filed in 2020, has started to heat up. The trial itself won’t start until next year, but last week attorneys from the DOJ and Google started to lay out their views in preliminary hearings.

So, what is the lawsuit all about? Charlotte Slaiman, an antitrust attorney and director of competition policy at the nonprofit Public Knowledge, says it revolves around Google’s dominance in the search engine market and the contracts that help it maintain that dominance.

“There’s a variety of exclusive agreements for Google to be the default search engine, and that has foreclosed competitors from offering their products instead,” Slaiman said in an interview with Marketplace’s Sabri Ben-Achour.

Sabri Ben-Achour: So Google has — I was just looking this up — 92% market share among search engines. But antitrust law isn’t just about being big, it’s about sort of conspiring to limit trade or create a monopoly. So what about Google’s business practices is the Department of Justice going after?

Charlotte Slaiman: Yes, they are particularly concerned about exclusive contracts. And the exclusive contracts are for being the default search engine on mobile devices, certain browsers. Some of those agreements are actually with cellphone companies. So there’s a variety of exclusive agreements for Google to be the default search engine, and that has foreclosed competitors from offering their products instead.

Ben-Achour: Right. So it’s not an accident that Google is the search engine that pops up on your phone?

Slaiman: Absolutely. Google pays a lot of money to be the default search engine.

Ben-Achour: So I’m thinking about this, and I’m trying to figure out, I guess, is what a court is going to figure out. Is that wrong? Is that unreasonable as a business practice?

Slaiman: Yeah, so I think it is. It’s important to understand a little bit about how search engines compete with each other, or really, are not competing is what we’re seeing today. But the data that a search engine gets from each search that happens each day is really important for making the search engine effective. As a user, you know, we want to see the most relevant results. And the way the search engine determines that depends a lot on the data that they’re learning about who clicks on what result. So being able to purchase customers through these default contracts is a really important way for a new search engine to get started and become more and more effective. So Google has been able to prevent competitors from getting the kind of market share they would need to build a really strong search engine because they’re not able to get that information about what the right results are. That makes it a lot harder for anybody else to provide a really great product.

Ben-Achour: Now, Google, one of Google’s attorneys, was saying that regulators are misunderstanding the market, that we shouldn’t be comparing Google to Bing and Yahoo. We should be comparing Google to Amazon, and almost the entirety of the internet, because, you know, you can buy things or look for things not just using Google. How compelling do you think that argument will be?

Slaiman: Well, you have to say something like that if you have 92% of the search market. All that’s left is to argue that, “That’s not the right market.” So I can see why they’re arguing that. And, you know, that’s a tough question that many antitrust cases really hinge on is defining the market. Certainly, there’s an extent to which, for some users and for some queries, there are multiple options. A lot of shopping queries do begin on Amazon and not on Google. But the search engine, the general search engine, where you can type in any kind of question and expect to get an answer, really is a different kind of product than a specialized search engine, where you go for restaurant reviews or shopping or handmade products. You know, these are all different types of search engines in a way. But that general search, where you can expect an answer for any type of question, really is unique.

Ben-Achour: In traditional antitrust cases, there’s usually a requirement to show some harm to the consumer. Is that demonstrable in this case?

Slaiman: Yeah, that’s a great question. So for most antitrust cases, especially today, we’re in this “rule of reason,” which is a category of antitrust law where the case really does hinge on being able to show a harm to consumers. So one of the hardest types of harm to show is a harm to innovation. But I also think that’s one of the most important harms that we really need to be paying close attention to and investing a lot of our antitrust energy into protecting innovation. But it is hard to show, quantifiably, what types of innovations we are missing out on today because we didn’t have strong competition in general search all this time. You know, showing some ways in which the quality of Google Search has gone down as competitors have, you know, had less of an impact in the market. One thing that we see that’s quantifiable is more ads on the page, seeing less clear indications that a result is an ad so that it’s easier for users to be confused and click on an advertisement thinking that it’s actually what Google has determined is the most relevant using their algorithm. But I also think that we are seeing the quality of the organic results go down. That is so hard to quantify — what types of innovations might have happened. Some innovations that we see in some specialized search is companies that actually go in and do a quality assessment of a result before they surface it to users. That requires a lot more staff. It’s a very different business model. But that can be really effective for some types of things a person might search for. So there’s all kinds of things that we could be missing out on, but I think that can be a difficult part of the case to show that.