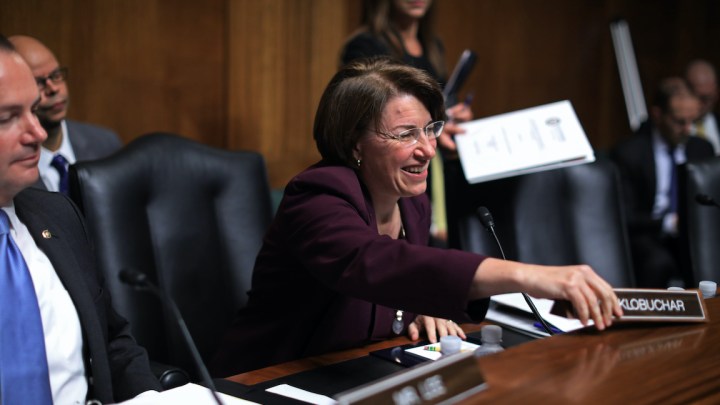 COPY
Sen. Amy Klobuchar at a 2018 Senate hearing. Her bill would raise the bar for approval of corporate mergers. Chip Somodevilla/Getty Images

Sen. Amy Klobuchar at a 2018 Senate hearing. Her bill would raise the bar for approval of corporate mergers. Chip Somodevilla/Getty Images
Listen Now

Now that there is finally a power-sharing agreement in the U.S. Senate, control of powerful committees is in the process of changing hands. Meaning that Democrats now can set the agenda in regard to which issues take up the spotlight and come to a vote.

That’s what Sen. Amy Klobuchar of Minnesota did Thursday, using her upcoming position running an antitrust subcommittee to roll out a bill that would substantially overhaul how the government regulates big companies.

The way it works now, for the government to block a merger or acquisition or prosecute a company for anti-competitive practices, regulators use the “consumer welfare” standard, according to Christopher Casey, a partner at the law firm Duane Morris.

“That generally focuses on whether there will be an increase in prices or a reduction in output as a result of a combination or other action,” he said.

That means the government has to prove it’s bad for consumers.

Casey said that’s a tough standard for regulators to meet, especially now. “The economy has changed so dramatically in the past 10 years. You just look at the dominance of the tech companies in American life.”

So Klobuchar’s legislation aims to make it easier to bring cases against big firms.

“One of the things that this bill does is change those burdens of proof, change those presumptions, so that we’re erring more on the side of overenforcement rather than underenforcement,” said Charlotte Slaiman, the competition policy director at the advocacy group Public Knowledge.

The bill would also provide more money to bring antitrust cases against and impose bigger fines on companies that break the rules.

“This is among the first time in decades that antitrust has become a political issue [and] has been the subject of important legislation and hearings and reports,” said Spencer Waller, a professor at Loyola University Chicago School of Law.

And there seems to be some bipartisan support to update antitrust rules not just in tech but also in highly consolidated industries like health care, pharmaceuticals and defense.