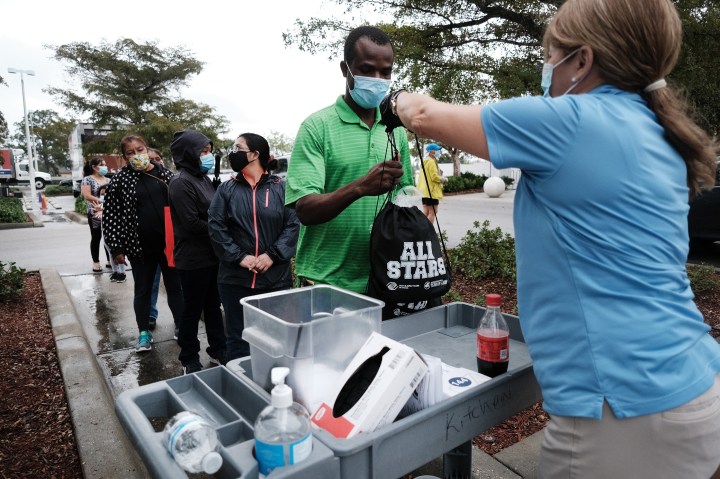 Food is distributed during a mobile food pantry in the agricultural community of Immokalee, Florida. Spencer Platt/Getty Images

Food is distributed during a mobile food pantry in the agricultural community of Immokalee, Florida. Spencer Platt/Getty Images

The U.S. Census Bureau reported this week that 11.6% of the U.S. population, or nearly 38 million people, were living in poverty in 2021 — using the official measurement that was devised all the way back in the 1960s.

The poverty threshold for a family of four — two adults and two children — was roughly $27,500 in 2021; if a family’s income is less than that amount, then its members are considered in poverty.

These thresholds are important because government aid eligibility uses federal poverty guidelines, which are based on the poverty thresholds set by the Census Bureau. To qualify for the Supplemental Nutrition Assistance Program (formerly known as food stamps) for example, your household income generally has to reach or fall under 130% of the poverty line.

The bureau has since developed the supplemental poverty rate, which experts say is much more comprehensive because it includes basic needs like medical expenses, although it still has its shortcomings.

While these statistics give us some sense of how many people in the U.S. are in poverty, they don’t capture the full spectrum of people who are struggling financially.

“We draw a poverty line, a specific dollar amount. And unfortunately, that means that someone who has just $1 of income more than that is called ‘not poor,’” said Robert Moffitt, an economics professor at Johns Hopkins University. “There are a lot of people who are just above the official poverty line who are still really struggling.”

How the official poverty measure works

The U.S. Census Bureau’s official poverty measure, which it’s used for decades, is based on “three times the cost of a minimum food diet in 1963,” and adjusts for family size, composition and how old family members are.

However, it doesn’t take into account out-of-pocket medical expenses or how the cost of living can differ drastically depending on whether you live in Los Angeles, where the median asking rent is almost $3,500, or Cleveland, where it’s just a little over $1,500.

Mollie Orshansky, a food economist, devised these thresholds in the 1960s, knowing that families of three or more people spent one-third of their after-tax income on food, according to the Department of Health and Human Services. She assumed that if a hypothetical family was in a “low funds” emergency and had to cut back on food expenses, they would cut back on nonfood items at the same rate.

After President Lyndon Johnson declared a war on poverty in 1964, Orshansky’s supervisors at the Social Security Administration wanted to extend her analysis to the overall population.

While the official poverty measure adjusts food expenditures for inflation, families now have to budget even more for basic needs such as the rising cost of child care, housing and rent.

“If you’re living in government housing and you’re getting reduced rent, the official poverty measure doesn’t cover that,” he said.

“I think the ability to compare the two is actually really important. And it shows us the size and the importance of government intervention,” Roberts said.

A new way of calculating poverty

Compared to the official poverty rate, the supplemental rate is based on food, clothing, shelter and utility expenses. This rate dropped to 7.8% in 2021, a decline of 1.4%, according to the government’s latest data. The 2021 poverty threshold for a two-adult, two-child household with a mortgage was more than $31,100.

The supplemental rate also expands the definition of what constitutes a family, including unmarried partners and foster children, and adjusts for regional differences in housing costs. On top of that, it subtracts expenses for “critical goods and services,” such as “work expenses, medical expenses, and child support paid to another household.”

“The supplemental poverty measure assumes that you need a certain amount of money to buy food, clothing and housing,” Moffitt said.

This means that if everyone is spending more on those items, then you need to spend more on them to stay above the poverty line, Moffitt explained.

But while the supplemental poverty measure shows us how much more people may be struggling because of expenses other than food, it also takes into account how government benefits are helping people. Think nutritional assistance, subsidized housing and child tax credits. (Moffitt pointed out though that while this measure is “superior in many ways to the official poverty measure,” it doesn’t fully look at, for example, all the medical benefits people receive.)

In 2020, the supplemental poverty rate fell below the official rate for the first time. It happened again this year.

The government distributed a third round of stimulus checks in 2021, while an expanded child tax credit provided families with up to $3,600 per child.

“The child poverty reductions were stunning,” Indi Dutta-Gupta, president of the Center for Law and Social Policy, told Levin. “We had very well-designed policies to send child poverty to levels we’ve never seen in this country.”

Congress has not renewed the expanded child tax credit, which expired in December, meaning that poverty numbers will likely rise.

“I worry that we won’t have learned the lessons that we should learn — that this is a policy choice,” said Roberts of CAP. “When we make investments in families and children, and people who are facing crises like unemployment, that’s when we have a really strong and fast-paced recovery, which sets us up for a much stronger economy long term.”

A continuum, not a cutoff

No matter what measurement is used, experts say there are still wide swaths of people who face financial hardship who aren’t accounted for when using thresholds.

“The more we move towards understanding poverty, not just as sort of an arbitrary cutoff, but as sort of a continuum and an experience, the better off we are in policymaking,” Roberts said.

Researchers outside the government have devised their own poverty measurements, including Moffitt of Johns Hopkins and John Fitzgerald of Bowdoin College.

They found that in 2019, 48 million people were living in poverty compared to the 40 million the government calculated.

They looked at quarterly spending data instead of annual income data, choosing quarterly reports because the people they surveyed were more likely to remember what they had purchased within that time frame. They also took credit card debt and health care deductibles into account.

Moffitt and Fitzgerald also found that there were 16 million more people who were “almost poor” in 2019 than the Census Bureau calculated. Someone is “almost poor” if their “adjusted resources are less than 150% of the poverty threshold.”

“We need programs to cover some people who are not the poorest of the poor, but … are still really struggling to be able to afford all the basics,” Moffitt said.