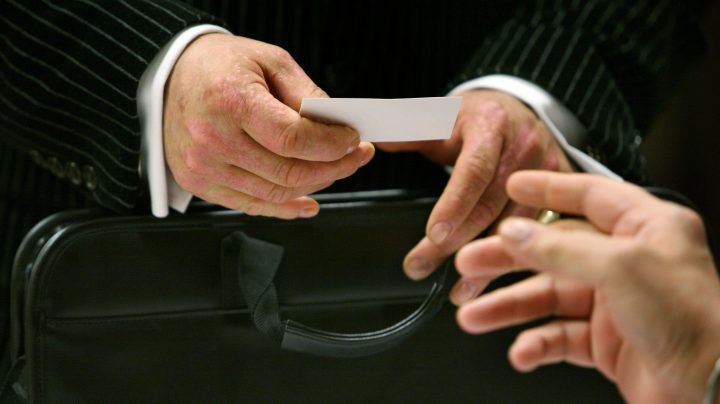 There is a growing trend away from the business card as we know it, and maybe for good reason. Before the pandemic, an estimated 27 million business cards were being printed around the world each day, adding up to more than 7 billion annually. Yet, according to data from Adobe, 88% of the business cards handed out are thrown away in less than a week.

As a replacement, businesspeople are turning to tech. Nowadays, rather than asking someone you meet to hold onto your physical card and enter the information manually, you might offer a QR code that instantly links to your contact details. You may also run into something farther off the beaten path, like chips put in people’s jewelry or acrylic nails, or maybe a potential collaborator or customer has a body implant that transmits their info.

Emily Glazer, a reporter at The Wall Street Journal, joined “Marketplace” host Kai Ryssdal to talk about the future of the business card. The following is an edited transcript of their conversation.

Kai Ryssdal: Tell me how you stumbled upon this story, would you?

Emily Glazer: This was one of those stories where I couldn’t avoid it. I kept, you know, trying to give my business card to people at events. And I was getting different kinds of responses like, “Here, look at this app on my cellphone you can scan,” or “Who even uses business cards anymore?” Or, “I’ll write my number on your business cards” — stuff like that. And it literally got to the point where I felt like I just was so bombarded with it that I felt like we needed to write a story.

Ryssdal: All right, so let’s go through some of these. One of them is QR codes. Talk to me about QR codes and how that worked — well, not how the QR codes work, but how that whole, you know, business card replacement theory goes.

Glazer: Absolutely. So I was at a dinner gathering in New York. And at the end of the event, the attendees were exchanging contact information. And I met Rob Krugman, who is chief digital officer for Broadridge Financial Solutions. And he offered his LinkedIn QR code to people. And it’s basically something that you tap on LinkedIn, you get a personalized QR code that comes up, and then people like myself can scan that, and it automatically enters their information into your phone and you can connect with them on LinkedIn. And Rob said he also has used this QR code on PowerPoints when he gives speeches so that people don’t have to, you know, just come up to him to ask for contact information. They could just scan it.

Ryssdal: OK. Let’s take a notch up the technological ladder to chips and close-contact readers that can sort of read elements in, like, a ring or whatever. Tell me that story.

Glazer: Yes, so QR codes have been around for a while, but implanting chips into your body is newer. And so my colleague Alex [Harring] spoke with Derek Peterson, who literally implanted a chip into his hand between his left thumb and index finger. And that chip has his contact information, so when he meets someone new, people can use their phones to download the details from him.

Ryssdal: We should say here that your story is replete with examples of the phone not quite reading, having to adjust position, giving it a try and again. I mean, it’s not like you just go boop! and you’re all set. Right?

Glazer: Yeah. And again, this was something that I observed. I was at a business roundtable conference in Washington, D.C. And Robert Smith, this private equity billionaire, had this almost like a plasticlike hotel room key card that had a big QR code on it to exchange contact information with an attendee. And I watched them for like a minute or so struggle. You know, he was making sure his thumb wasn’t covering the code. The attendee was putting her phone at different angles. And then finally, he literally switched to a different card that had the QR code in a darker color. And voila. And, you know, when I talked to him about it after, he said in a statement it’s still better than manually entering information, so even if it takes a little long and even if it isn’t perfect, he’d take this over the traditional paper business card.

Ryssdal: I’m gonna guess that you, like me, have a stack of old collected business cards in one of your drawers in your desk and, you know, bound up in a rubber band and all that.

Glazer: Well, have I joined the 21st century? That’s a much bigger question than I imagined I was going to answer today. So, it’s so funny, Kai, after this article came out, you know, we have our new desks in our office and I literally brought all of my business cards that I had put in a box from moving from L.A. to New York, and the rubber bands had literally broken, and I’ve since shoved them in the bottom of a cabinet drawer. My to-do list has this item that will never get crossed off, like “Enter contact information from business cards to Excel sheet.” However, I really do love the process of meeting someone, exchanging the card, and it spurs conversation. So there’s that too, and you can’t replace that with the technology just yet.