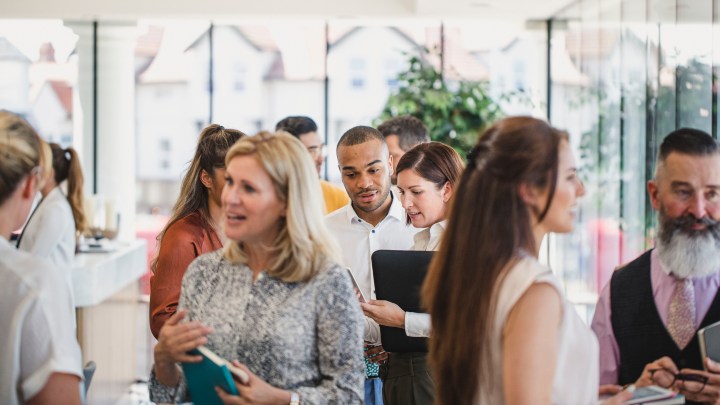 Last week, Las Vegas hosted its first major trade show since March 2020, a commercial construction convention called World of Concrete. The convention typically attracts more than 50,000 masons, contractors, engineers and salespeople. And they typically do typical convention things, like meet with clients, pass out a zillion business cards, rack up some swag and hit the happy hour at the hotel bar with their colleagues.

This year was a little different. Organizers haven’t released attendance numbers, but crowds at the Las Vegas Convention Center were visibly thinner. And it appeared that lots of conventioneers hadn’t quite got their in-person groove back after more than a year of doing business mostly online. Yet there they were, facing down three days of interacting face-to-face. And given the millions of people who attend conventions every year, you could be next.

So, we’ve got some tips.

Tip 1: Remember where you left your business cards

Virginia Dean, who does marketing for the Association for Materials Protection and Performance, was the very first person I interviewed on the convention floor. When I asked if she wanted to trade business cards, she winced.

“I left them all in the office, and I really haven’t been back into our office since last March,” Dean said. “I did not bring them home with me because I didn’t know we would be shutting down for 15 months.”

Forgotten business cards turned out to be a recurring theme at the convention. If they weren’t still in quarantine at the office, they were stranded outside the suitcase at home or left in the truck outside.

“I haven’t done a conference in over a year,” said James Clark, a salesperson for the pavement preservation company Crafco. “I had forgotten to bring my cards, but don’t worry, I brought them on Day 2.”

Goodbye registration table and paper credentials. Hello digital badges and contactless check-in. Expect more conventions in 2021 to replace the lanyard-nametag combo with a QR code you’ve downloaded to your phone.

That made check-in a lot faster. But it also posed a problem for Caroline Roberts, who was scouting the convention for future events for the Association of Equipment Manufacturers.

“We’re so rusty that we don’t recognize people anymore,” Roberts said. “So you forget. You usually have that nametag around your neck, so when you’re looking at someone, you can be reminded of their name. And with the digital badge we couldn’t cheat.”

That potential client you chatted with in the coffee line at Starbucks? Better commit her name to memory before you run into her again on the convention floor.

Tip 3: Get permission for the handshake

The pandemic has introduced at least one new point of etiquette in convention settings: An extended hand must be accompanied by a request.

“If you’re meeting someone for the first time, people ask for consent now,” said Danielle Wilson, public relations manager for the toolmaking company Hilti. “That’s been interesting to me. And I say, ‘Yes, yes, you can shake my hand. Yes, you can hug me.'”

Tip 4: There may be fewer people at the convention. But they may be more serious about doing business.

There was no question in Hilti North America CEO Martina McIsaac’s mind that if World of Concrete was happening in 2021, her company was going to be there. Some customers only buy Hilti products at the annual trade show.

“There will always be a place for it, to be here face-to-face at a convention,” she said.

But the company’s success with digital sales during the pandemic has prompted her to reevaluate just how much Hilti should budget for conventions, especially since Zoom sales calls often yielded more substantive conversations with potential clients.

“Will we be able to get deep enough into the customer’s needs?” McIsaac asked. “It’s one thing to hand them a big jackhammer and let them break concrete, that’s a fairly simple interaction. And I think we’re going to learn a lot from this show, and then, depending on the outcome, we’ll decide.”

Ironically, World of Concrete’s lower attendance numbers may have generated more of the interactions McIsaac was looking for.

Several salespeople said they wished turnout had been better but that the people who did come to their booths were less interested in perusing branded swag and more focused on actually buying something.

“A lot less tire kickers, curiosity seekers,” said Craig Maiwald, a digital construction consultant for Hilti. “A lot of times, owners will bring employees as a reward to Vegas. I’ve seen a lot less of that group of guys here.”

Tip 5: Prepare for convention fatigue to set in earlier

Those who made it to the convention were, for the most part, thrilled to be out of the house interacting with clients, co-workers and complete strangers again.

On the last day of the convention, Dawe was ready to call it a trip.

“Vegas — two to three days, let alone four, is enough time for me,” he said. “I’m looking forward to getting back to my home.”

Last tip: A night at home might just sound a lot more appealing than it used to.