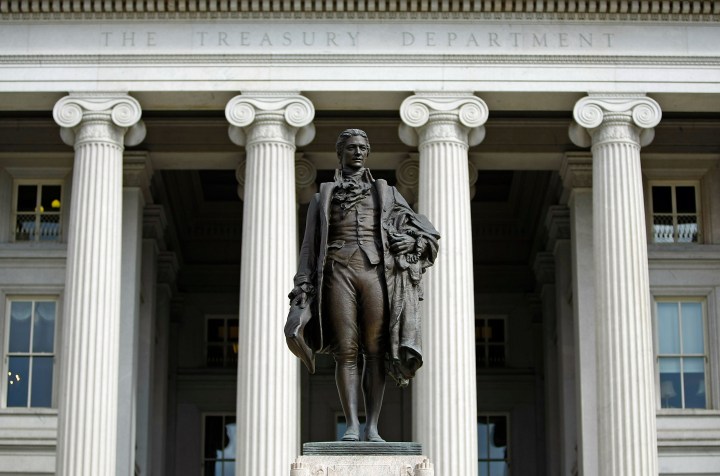 A statue of the first United States Secretary of the Treasury Alexander Hamilton stands in front of the U.S. Treasury. If you've ever wondered where corporate fines go, they usually head here. Chip Somodevilla/Getty Images
I've Always Wondered ...

A statue of the first United States Secretary of the Treasury Alexander Hamilton stands in front of the U.S. Treasury. If you've ever wondered where corporate fines go, they usually head here. Chip Somodevilla/Getty Images

Corporate wrongdoing can have a hefty price tag, with some companies having to dole out billions of dollars in fines. The big banks, for example, had to pay $110 billion for their role in fueling the mortgage bubble that ultimately led to the financial crisis.

At the federal level, a large number of governmental agencies have the power to hit companies with fines, including the Department of Justice, the Environmental Protection Agency, the Securities & Exchange Commission, the Federal Trade Commission and the Consumer Financial Protection Bureau.

“Some can impose civil penalties just through an administrative proceeding. Other agencies, like the Federal Trade Commission, [have] to go to court in order to impose a civil penalty,” explained David Vladeck, a professor at Georgetown University Law Center who served as the director of the FTC’s Bureau of Consumer Protection from 2009 to 2012.

That means if the FTC wants to hit a company with a civil penalty, a judge has to determine what it should be, Vladeck added.

As for where that money goes: it depends, but generally it goes to the U.S. Treasury, Vladeck said.

“That money went straight to the Treasury. It didn’t pass through the FTC’s hands,” Vladeck said.

However, Vladeck said agencies, such as the Consumer Financial Protection Bureau, have funds to provide redress to consumers who have been injured by a company, while some are allowed to keep some civil penalty money to help fund their enforcement activities.

Over at the SEC, a spokesperson said the agency can allocate civil penalties to one of three places: the general fund at the U.S. Treasury, the Treasury’s Investor Protection Fund (which is used to help fund awards granted to whistleblowers), or another separate fund used to repay harmed investors.

Vladeck said that when he was at the FTC, it was frustrating because the agency was underfunded while sending hundreds of millions back to the Treasury.

“We by and large returned more money to the Treasury in civil penalties than we got through appropriations,” Vladeck said. “I hope Congress will get around to reconsidering the processes that the FTC has.”

As for what the Treasury Department does with its money, let’s look at the penalty Facebook received. “There’s a $5 billion check that was deposited in the general fund of the United States. The general fund can be used to fund anything,” Vladeck said. “[It] theoretically might lessen people’s tax payments. But it can be used basically for anything Congress decides.”

The allocation of civil penalties has received criticism for being what some say is an opaque process.

The 2007-08 financial crisis, which is considered one of the worst economic disasters in U.S. history, led the unemployment rate to reach 10% in 2009 and caused Americans to lose a collective $9.8 trillion in wealth.

The big banks had to pay a total of $110 billion in mortgage-related fines for their role in the crisis.

The Wall Street Journal analyzed where that money went, finding that the Treasury Department received about $49 billion — the most money out of all the entities, as one would expect.  “How it spends the money isn’t specified,” the Journal noted.

About $45 billion was dedicated to “consumer relief,” which the Journal said is a category aimed at “helping borrowers and funding housing-related community groups.” States received more than $5.3 billion, while at least $447 million went to the Justice Department.

Other recipients, which included multiple federal agencies and whistleblowers, ended up receiving $10 billion.

The Journal reported that there was “a lack of detailed disclosure,” frustrating think tanks, advocacy groups and even bank executives who wanted more transparency from the government.

How funds are doled out at the state level

Local and state agencies also have the authority to impose fines.

“In states, that money usually goes into what’s called a general fund,” said Kathleen Engel, a research professor of law at Suffolk University. “The state uses it according to its authority and budget.”

So when attorneys general bring litigation against a company, and are awarded money, it usually goes to the general fund, although sometimes it might help fund the litigation activity of the agency, Engel said.

She added that sometimes she’s seen funds at the state level go to dedicated programs for schools or road maintenance.

Although the Centers for Medicare & Medicaid Services is a federal agency, a portion of the funds it collects from civil monetary penalties are returned to the states where those penalties were imposed.

“State CMP funds may be reinvested to support activities that benefit nursing home residents and that protect or improve their quality of care or quality of life,” according to the Centers for Medicare & Medicaid Services.

Overall, Vladeck said that civil penalty amounts are “meted out based on what the agency or the judge thinks is sufficient to deter the company from engaging in wrongdoing again.”

The biggest flaw with financial penalties, Engel said, is that they may not be a deterrent if the money a company can make by not obeying the law exceeds the size of the potential penalty. (Although she noted that companies may not want to risk harming their reputations.)

Engel pointed out that companies like Wells Fargo have been sanctioned multiple times. The bank and its subsidiaries have been hit with more than 100 fines in the past decade by multiple agencies, according to the online database Violation Tracker.

To prevent corporate wrongdoing, beyond just fines, Engel said she would like to see the development of a stronger consumer movement that engages in collective action.