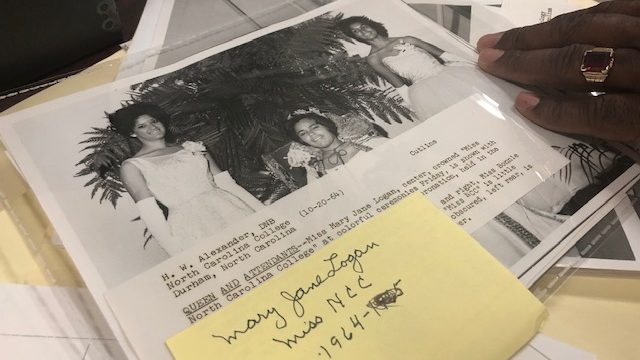 COPY
Archivist Andre Vann of North Carolina Central University handles a 1964 photo of the homecoming queen and her attendants, to be included in the HBCU Getty Images collection. Leoneda Inge

Archivist Andre Vann of North Carolina Central University handles a 1964 photo of the homecoming queen and her attendants, to be included in the HBCU Getty Images collection. Leoneda Inge
Listen Now

Four historically Black colleges and universities have embarked on a journey with Getty Images to digitize tens of thousands of archival photographs. The global visual media company says the partnership will help preserve the culture and history of some of the most important images of Black American lives.

North Carolina Central University in Durham, founded in 1910, is participating in the inaugural grant program. University archivist Andre Vann said the institution has a lot of photographs to share with the world.

The goal is to “elevate up images that have sort of been hidden in plain sight,” Vann said.

NCCU has attempted to digitize thousands of its most important historical photographs, but thousands more need attention. It is not just the picture, he said, but the story behind the picture that counteracts a monolithic view of African Americans.

“And what you see is a depth and diversity of thoughts and actions that comes out of those photographs,” Vann said. “You can’t make that up. You can’t stage that. It is just a reality.”

In the NCCU library, there are boxes full of photographs, programs and newspaper clippings. One box has pictures of homecoming queens over the decades. It was easy to pick out the pictures from the 1960s because of the hair, makeup and long, white evening gloves to go with the gowns.

The school also has images of visits by President Gerald Ford and first ladies Eleanor Roosevelt and Michelle Obama. One of Vann’s favorite groups of photos highlights a famous frequent visitor.

“For me, one who speaks to my era and spoke to my generation is the Rev. Jesse Jackson, who has been to this institution more times — as we say in the country — than the law allows,” Vann said.

The new partnership with Getty Images is about bringing the photos into a much more public space, Vann added. NCCU will get to keep all copyrights from its photographs.

The digitized images will be placed, along with photos from other HBCUs, in a special Getty collection. Half the revenue from the images will go back to the school; some of the money will be channeled into a scholarship fund for HBCUs.

Cassandra Illidge is vice president of partnerships at Getty Images and executive director of its new HBCU grants program. She visited NCCU and the other campuses in the program.

“The wealth, the fashion sense, the beauty, the style and grace of men and women of color in the community dating back to the 1900s,” Illidge said. “I mean, that’s incredible, and it’s a foundation that shows the strength in all of us.”

Getty is partnering with Epson America and Adnet Global to digitize and restore images. The partnership includes training students to help get the work done.

Alejandro Ibrahim is a history major and soon-to-be senior at NCCU.

“So with this photo, what we are going to do is put it in the scanner. We’re also going to get this tag, which is the metadata,” Ibrahim said while demonstrating the process. “The metadata is the information behind the photo, so what’s going on behind the photo and how we interpret it.”

Prairie View A&M in Texas, Jackson State in Mississippi and Claflin University in South Carolina are also included in this initial $500,000 grant to set up an archival process. It will guarantee that some images that might have faded away over time will be preserved.