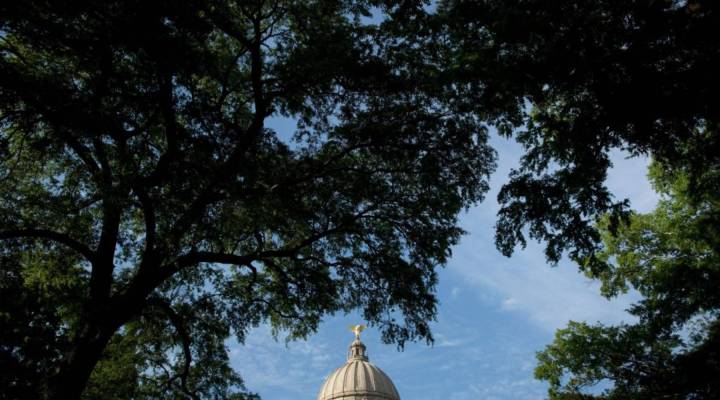 COPY
A view of the State Capitol in Jackson, Mississippi. BRENDAN SMIALOWSKI/AFP/Getty Images

Back in 1975, Jake Ayers Sr. sued the state of Mississippi, arguing that the state treated its three historically black colleges and universities differently than it did the state colleges and universities white students attended. A landmark case to desegregate higher education, the Ayers case, as it is known, wound its way through the courts for nearly 30 years, and ended in a $500 million settlement for the state’s HBCUs. That money is about to run out.

Adam Harris wrote about it an article for the Chronicle of Higher Education. He says the money has done some good, but that public universities in the state are still deeply segregated. The following is an edited transcript of his conversation with Marketplace Weekend host Lizzie O’Leary.

Adam Harris: There have been gains, you know, they have new buildings or sometimes they have new programs — some of them are sustainable, some of them aren’t sustainable. I think that there are still some very fundamental problems that, you know, the government isn’t really focusing in on since Mississippi, according to them, has proven that they’ve desegregated their higher education system by settling the Ayers case.

Lizzie O’Leary: You know there’s this really interesting question when we talk about desegregation. What does it mean to desegregate an HBCU?

Harris: Yeah and that is the question that people are grappling with. Most people place the onus of desegregation on black colleges. It’s almost like blaming them for their history, which that they were created to serve undeserved populations, you know, the black population.

O’Leary: … that wasn’t being served by the rest of the educational system.

Harris: Yeah, they were essentially shut out of higher education. So there there’s still some baked-in structural inequities that the Supreme Court talked about, where they’re asking questions of the state like, is there a difference between a institution that has been historically underfunded and a institution that has not been historically underfunded? And the state tried to argue that no, because now students have genuine freedom of choice, and they can go wherever they want. But we’ve seen that when that’s the case, 99 percent of white students in Mississippi are going to predominantly white institutions. And black students have started to go to different institutions in Mississippi, but even then, you started to see enrollment declines among black students at the predominantly white institutions in the state.

O’Leary: We talked to a student who was really proud of being at MVSU and her experience there. And I guess I was hoping you could put into context why a school like that is so important when there is, as you’ve said, choice. When a student could go anywhere.

Harris: I think there are a couple of factors that lead students to choose HBCUs. I personally went to an HBCU; I went to Alabama A&M University. And there’s a very important role that black colleges are still playing. You know there are not that many black colleges in the country. They represent 3 percent of the nonprofit institutions, public institutions, in the country. And they graduate 17 percent of black students and account for 24 percent of black science, technology, engineering and math graduates. Even in Mississippi, it’s greater than that, where they had 45 percent of black first-time students who are earning undergraduate degrees. So I think that the fact they’re still educating a disproportionate amount of students is something that is important, and it puts in a context this historical legacy and this role that they’re still actively playing for a lot of low-income students and black students.

O’Leary: What happens in Mississippi when the settlement money runs out?

Harris: As the former commissioner of their higher education system says, “they have to compete.” And black colleges in Mississippi are fighting for funding and students with one arm handcuffed by history, and it is going to be difficult for them to compete. So it has yet to be seen. But you know, other states are looking at this and saying “how are we going to make sure our black colleges are sustainable?”

O’Leary: Yeah before I let you go, I want to ask you about what’s happening in Maryland, because there’s a sort of similar situation being hashed out there. Can you explain it for us a little bit?

Harris: It is similar, but they’re concerned that if they accept, you know, the offer that the state has put on the table, where the governor said we’ll give you up to $100 million over the span of a couple of years, that if they do that they will end up in the same position that Mississippi ended up in. And so they are really fighting for sustainable programs, you know, distinctive programs that will draw students. And they want the state to make sure that none of those programs are duplicated because that’s one of their main issues: a black college will get a program, and then a white college not too far down the road will get a similar program. And where will the student end up going — or the white student end up going? They’ll probably end up going to the white college as opposed to the black college.