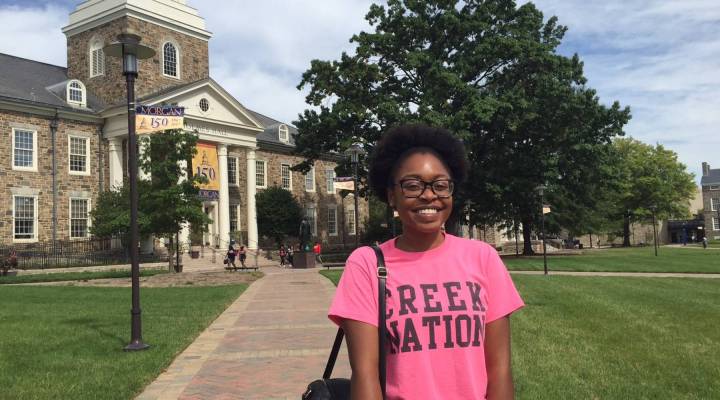 On the 150-year-old campus of Morgan State University in Baltimore, the band warmed up a crowd before a groundbreaking ceremony for a new $90 million student services building. Then President David Wilson stepped to the podium to welcome the mayor and dozens of other dignitaries and alums.

“Growth is essential to the vibrancy and to the relevancy of a modern university,” Wilson told the crowd. “Morgan must never, ever cease to grow.”

The historically black public university is growing. At a time when college enrollment overall is declining, applications to Morgan for this fall were up 20 percent. The new freshman class of about 1,250 students is the largest in five years.

Wilson credits a big investment in the admissions process. The college hired a new rep in the Midwest and another focused on recruiting more Latino students. A quarter of Morgan’s students today do not identify as black. Like many colleges, Morgan is also recruiting more international students.

“Then we have invested equally in ensuring that the nation and prospective students know the value of our programs,” he said.

Those programs include summer internships at Facebook and Google, and a new partnership that allows students to study in China.

Morgan’s growth is part of a larger trend among historically black colleges and universities. North Carolina Agricultural and Technical State University just welcomed the largest class in its history. Virginia State University’s enrollment is up nearly 50 percent over the last two years.

Michael Lomax, who represents 37 private HBCUs as president of the United Negro College Fund, said some of the growth is a recovery from a 5 percent dip after the Obama administration tightened lending standards for the federal Parent PLUS loan in 2011.

“That issue has been resolved, new credit standards have been established and it’s easier for parents to borrow again,” Lomax said.

While many HBCUs still struggle with heavy debt and low enrollment, more than half have seen growth in the past few years, according to Marybeth Gasman, who researches historically black colleges as director of the Penn Center for Minority Serving Institutions.

“HBCUs are tuition driven, so any kind of enrollment increase, as long as they’re prepared for it, is going to put them in a better position,” she said.

Gasman said the current racial climate in the country — with white supremacists recruiting on college campuses and the contentious debate over Confederate monuments — has also prompted more students and parents to consider HBCUs.

“I think it’s a combination of what’s going on in the country that’s negative, but it’s also some positive things about really making sure that people know the value of an education at HBCUs,” she said.

Morgan State freshman NaTavia Williams grew up in Colorado Springs, Colorado, where she was often the only black student in a class. She chose Morgan for its multimedia journalism program. She said a racially motivated attack on her sister at a predominantly white university last fall also influenced her decision.

“That was really shocking to me, and I knew I didn’t want to experience the feeling of not belonging in an institution that I was paying for,” Williams said.

First-year student Jocelyn Christian grew up in Baltimore listening to the Morgan band and choir.

“They have a phenomenal music program, very rigorous,” she said. “And on top of that, being that it’s an HBCU, it was just another plus to the package deal.”

The UNCF’s Lomax sees a generational difference in today’s college students. When he attended college in the 1960s and ’70s, he said, many of his fellow African-American students felt they had to tolerate indignities for the greater goal of integration.

“I think this new generation doesn’t feel the same sense of obligation,” he said. “I think they just want to feel like this is their institution as much as it is anyone else’s.”

And while black students are working to make campuses all over the country more inclusive, a growing number are choosing colleges where they’ve always been welcome.