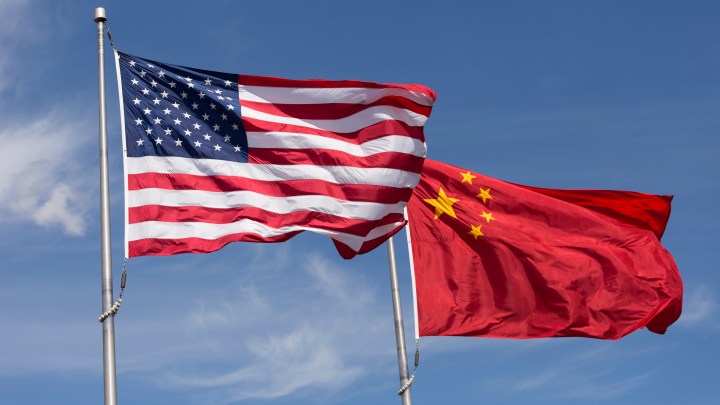 COPY
A measure being considered in Congress proposes establishing a mechanism to review, and possibly restrict, some American companies from investing in China. cbarnesphotography/Getty Images

A measure being considered in Congress proposes establishing a mechanism to review, and possibly restrict, some American companies from investing in China. cbarnesphotography/Getty Images
Listen Now

The aim of the recently passed CHIPS Act is to help boost American competitiveness with China in semiconductor production. Another bill in Congress, the bipartisan COMPETES Act – which CHIPS was originally a part of – is much wider in scope.

One proposal by a group of bipartisan lawmakers seeks to control how parties in the U.S. can invest in competitor nations like China. The legislation would establish review mechanisms to monitor national critical capability and possibly restrict activities deemed to threaten “national critical capability.” If passed, companies in sectors like artificial intelligence, pharmaceuticals and quantum technologies could face scrutiny from the government.

While the U.S. already has rules on how foreign actors can invest here, experts say the reverse is unprecedented. Business groups like the U.S. Chamber of Commerce and the National Foreign Trade Council have panned the legislation, saying in a letter to Congress that the proposed rules are too broad and could cause compliance difficulties.

“In some ways, what the U.S. is proposing is relatively new, and it probably will then be accompanied by other countries around the world, at least, America’s friends and allies moving in a somewhat similar direction,” said Scott Kennedy of the Center for Strategic and International Studies in an interview with “Marketplace Morning Report” host Sabri Ben-Achour.

Sabri Ben-Achour: So, you know, behind the scenes in the build-up to this bill, and even still now there are a few versions of this idea that the U.S. should be monitoring or regulating how companies invest, when it comes to certain technologies in certain countries, meaning China. What might that kind of review look like?

Scott Kennedy: There are a variety of different forms this could take, one model would be just simply requiring Americans who invest abroad in high tech to register those investments with the U.S. government. A more invasive approach would require U.S. government approval for certain kinds of technologies and certain kinds of countries as a matter of course. And then there could be something in between those two broad categories. So there’s a lot of different ways that one could go about trying to regulate American investment abroad.

Ben-Achour: In practice, what might this look like? So a company wants to build a factory or something, and they have to submit a proposal before they can do it?

Kennedy: Well, I think the way the legislation has been evolving, is, let’s say you’re a company that wants to invest in China, or in another potential adversary, but China’s really what’s animating this. So if you want to invest in a country like China and you have some advanced technology, most likely, what you’ll need to do is register that planned investment with U.S. authorities, the Commerce Department, or if they create a new entity. And then you might have to wait for approval, or go ahead and then your ticket may be called and you may have to go back and explain yourselves. It’s also possible the U.S. will come up with a very clear list of technologies that are covered, and where investment can’t go ahead until there’s a review. So I’d expect for most American companies, this will look more like just a registration system in the same way that you register your imports and exports with U.S. customs. But for a small number, this will be a new regulatory hoop that could take them several weeks or months to get through.

Ben-Achour: The idea that the U.S. would, you know, somehow regulate or monitor outgoing investment from here to other countries has been criticized by proponents of free trade, venture capitalists, business groups, including the U.S.-China Business Council. And those concerns were enough to keep it out of the CHIPS Act, at least. What are the main concerns?

Kennedy: The first is that having a very invasive outward investment screening system might be highly burdensome to American industry and innovators who are looking to collaborate with other organizations around the world to push the boundaries of knowledge, which helps them stay at the forefront of various industries. And if this becomes so cumbersome that they can’t do so, it may slow them down. In addition, it may, with those kinds of restrictions, limit interest by others in investing in the United States or studying in the United States or innovating in the United States, if our system [has] too many restrictions. If it’s too onerous, we may end up killing the goose that lays the golden egg and constraining our own innovation at home and abroad, which might be a greater risk than whatever technology we might end up supposedly giving to adversaries out there. So I think we’ve got to strike a balance that does everything it can to continue to protect what’s best about the American economy, which is our innovative ecosystem.

Kennedy: There are only a few countries that I’m aware of that have extensive outward investment screening systems. Taiwan actually is one that does. There are strict regulations on what kind of things you can invest in China and has to go through Taiwanese authorities. But most countries primarily depend on an export-control regime to manage the outflow of technologies as opposed to investment. So in some ways, what the U.S. is proposing is relatively new, and it probably will then be accompanied by other countries around the world, at least, America’s friends and allies moving in a somewhat similar direction.

Ben-Achour: How do you think China would see this if we had a system like this?

Kennedy: Well, I’m certain that the way Chinese propagandists will frame this [is] as an effort by America to restrict the free flow of commerce, trade and investment between China and the rest of the world. And that this is meant to keep China down. I’m sure that will be how they frame it. And of course, China itself has a whole variety of restrictions [on] the inward flow of investment into China. We’re trying to align that with Chinese industrial policy [and] national security policy. They also have restrictions on outward investment, as well. And so although they may criticize the U.S., they do so missing the fact that these broader contexts of where our overall relationship is and the fact that they have a lot of restrictions on the flow of technology as well.