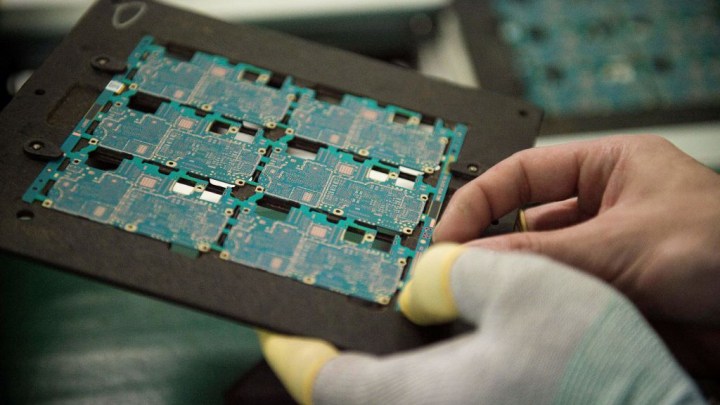 COPY
This latest move by the U.S. appears to restrict the sales of advanced computer chips to all Chinese companies. Nicolas Asfouri/AFP via Getty Images

This latest move by the U.S. appears to restrict the sales of advanced computer chips to all Chinese companies. Nicolas Asfouri/AFP via Getty Images
Listen Now

U.S. chip maker Nvidia revealed this week that the U.S. government said it could not export certain advanced computer chips to China without special permission.

Nvidia said in two SEC filings that the new policy would put more than $400 million in sales at risk and that it will still be allowed to develop its chips in Hong Kong, but cannot sell them to China.

The U.S. has been trying to cut off individual Chinese companies like Huawei from advanced computer chips for some time now, but this latest move is new in that it appears to restrict selling to all Chinese companies.

“The U.S. is hoping that by preventing China from accessing some of the most advanced chips, it will slow down Beijing’s ability to apply computing power across its economy, but especially to its military systems, said Chris Miller, associate professor at the Fletcher School of Diplomacy and Law at Tufts University and author of the upcoming book “Chip War: The Fight for the World’s Most Critical Technology.”

The chips in question can be used to develop more advanced artificial intelligence and weapons systems. China’s foreign ministry said the U.S. was “stretching the concept of national security and abusing state power.”

“The concern for the U.S. semiconductor industry has long been that China plays a huge part in revenues and, if you cut off those revenues, then the tech companies can’t invest in the next generation of technologies,” said Adam Segal, director of the digital and cyberspace policy program at the Council on Foreign Relations.

China could try and get these chips from businesses around the world that buy them legally. And for years now, China has been trying to hurry along its own chip-making capabilities. But there is some risk cutting China off could accelerate that process, according Jordan Schneider, senior analyst at the Rhodium Group.

“That demand and those sales will be shifted elsewhere, so Chinese competitors are going to have their orders increased, which will allow them to increase their R&D budgets and potentially get them to the technological frontier that Nvidia is on, faster.”

Restricting the export of chips also has implications for Taiwan. Both the U.S. and China build many of their chips in Taiwan, and an open question is whether the U.S. will try to prevent not just U.S. companies from sending chips to mainland China, but foreign companies too.

“If the U.S. decides, for example, to extend those extraterritorial export controls to Taiwan, then that just adds to the pressure on the U.S.-Taiwan-China relationship,” said Paul Triolo, senior vice president for China and technology policy at Albright Stonebridge Group.