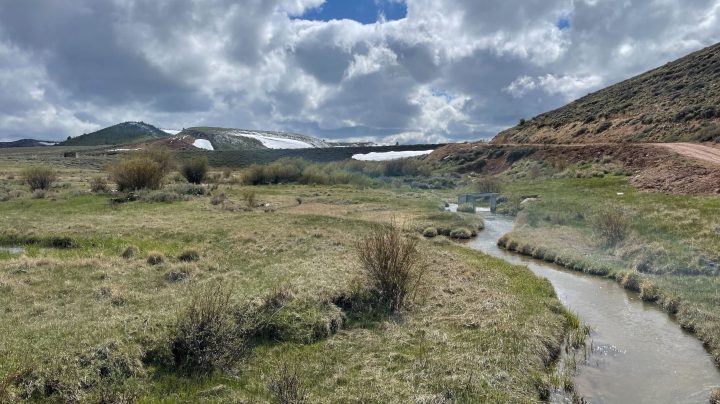 COPY
A creek in the Sage Creek Basin area outside Rawlins, where the natural spring that supplies the city is located. Caitlin Tan/Wyoming Public Radio

A creek in the Sage Creek Basin area outside Rawlins, where the natural spring that supplies the city is located. Caitlin Tan/Wyoming Public Radio
Listen Now

This spring, many residents in the small city of Rawlins, Wyoming, turned on their faucets and nothing came out.

Now, local businesses are operating under water restrictions. Hans Pedersen, who owns West Side Car Wash and Wash and Dry Laundry, had to shut down for a week in March due to the shortages.

“I really hope I can keep my business open and afford to make my payments because to put that kind of time and effort into something and lose it over something like this, it’s really hard to take,” he said.

Pedersen said tougher water restrictions could put him out of business.

The Rocky Mountain West’s 22-year-long drought is putting pressure on drinking water supplies, and compounding water infrastructure issues are making the situation catastrophic in some areas.

In Rawlins, local officials determined a big leak caused the water shutoff, which added on to a series of leaks from the past year.

“We’re about half of the flows daily that we normally receive. So some of that could be that the leaks have gotten worse,” said Mira Miller, a spokesperson for the city of Rawlins.

However, this area has also seen its water sources declining.

The drought is making it more important than ever for the city to look at its aging water infrastructure. The city found that much of the main water pipeline was corroded, there were leaks, faulty blow-off valves and some of the original piping is made of wood.

“I believe it’s like 105 years old. We have 7 miles’ worth of it left, and that’s what we’re replacing now,” said Stevie Osborn, the Rawlins water treatment plant operator.

Osborn said the spring that is the city’s main source of water used to produce so much water that you could hear it rushing into their system, but now, it is more like a slow-moving stream.

The city has imposed water restrictions, like only watering lawns once a week, and it has a $20 million plan to improve its water infrastructure. Miller said it is a wake-up call for the Rocky Mountain West.

“I think a lot of towns like us might not have been able to see the water infrastructure problems,” she said.

According to the American Society of Civil Engineers, the nation’s drinking water systems are aging and underfunded. A study last year found the amount of treated water lost each day to leaks and pipeline breaks could fill more than 9,000 swimming pools.

“And it’s really hard to get the focus that we need on fixing the problem, because people aren’t interested in it until they’re at a point of crisis,” said David Sedlak, a University of California, Berkeley, engineering professor. “All of these western parts of the country are running into this problem of the water supply shrinking, and in many cases, the demand continuing to grow.”

Sedlak said towns can address these issues by diversifying their water sources, like treating and cleaning sewage so it can be reused.

“And by recycling our wastewater, we can essentially expand our water supply by close to 50%,” Sedlak said.

Back at Hans Pedersen’s car wash, the water is flowing again. But he is aware that the city is asking people to wash their cars less frequently.

“It’s never a good feeling when the city is asking people not to use your business,” Pedersen said. “But I mean, I get it, I understand.”

The city has notified citizens that it anticipates the water restrictions will continue for at least the rest of the year as it works on shoring up the water system.