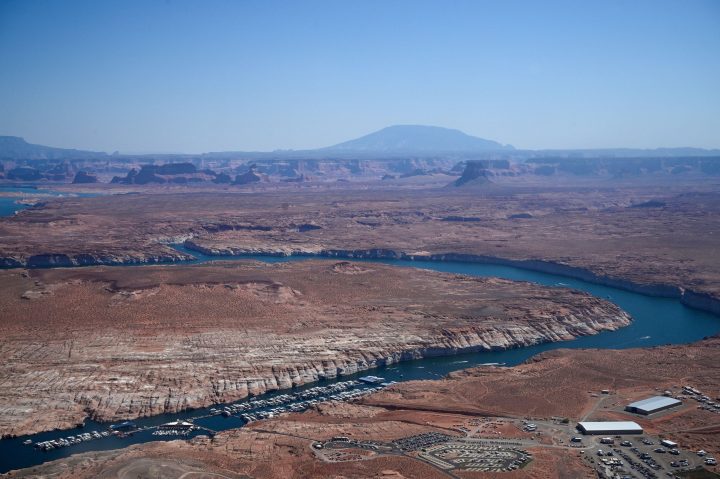 COPY
Boats are seen in low water at the Antelope Point Marina in Lake Powell on the Colorado River in Page, Arizona, on Sept. 4, 2022. Robyn Beck/AFP via Getty Images

Boats are seen in low water at the Antelope Point Marina in Lake Powell on the Colorado River in Page, Arizona, on Sept. 4, 2022. Robyn Beck/AFP via Getty Images
Listen Now

The Colorado River has a supply and demand problem: Too many farmers and cities and hydroelectric dams drawing on its resources while drought persists and water levels dwindle.

Efforts to solve that problem have stalled as seven Western states missed a federal deadline to negotiate a water conservation plan. There’s still no plan – and not a lot of direction from the federal government, either.

The Department of the Interior gave the basin states 60 days to figure out how to conserve at least 2 million acre feet – about as much Colorado River water as the whole state of Arizona uses in a year.

“Unprecedented,” said Jason Robison, a professor of natural resources law at the University of Wyoming. “Two to four million acre feet in conservation saving blows the doors off of anything that has been done since the onset of the megadrought in 2000.”

So, he said, it’s not surprising the states couldn’t work it out in two months. But this all started with an ultimatum. Interior said negotiate cuts or we’ll impose them. And so far, they haven’t made good on that threat.

Some stakeholders see the lack of direction as sort of an extension.

Like Adel Hagekhalil, director of the Metropolitan Water District of Southern California.

“I think they opened the door to continue the dialogue on some additional voluntary cuts that we need to make that can respond to the changing climate because the conditions are not getting better.”

He’s optimistic that funding in the Inflation Reduction Act could help move things along. He says it can be used to pay farmers to conserve water.

Other stakeholders are hungry for some stronger leadership from the federal government.

“Well, I think we would have liked to have seen a definite deadline,” he said.

He said that sends a message that his community won’t continue to make sacrifices while others are not.

“Using our water resources as leverage, that was I think an important strategic move to really advance a plan,” he said.

If negotiations continue to break down, Jason Robison at the University of Wyoming says the federal government has the legal authority to impose some unilateral cuts.

That doesn’t mean it wants to flex that muscle.

“It really is a backstop,” he said, adding that all parties would rather the conservation be voluntary.

But with 40 million people relying on the river for water and electricity, the consequences of inaction are dire.