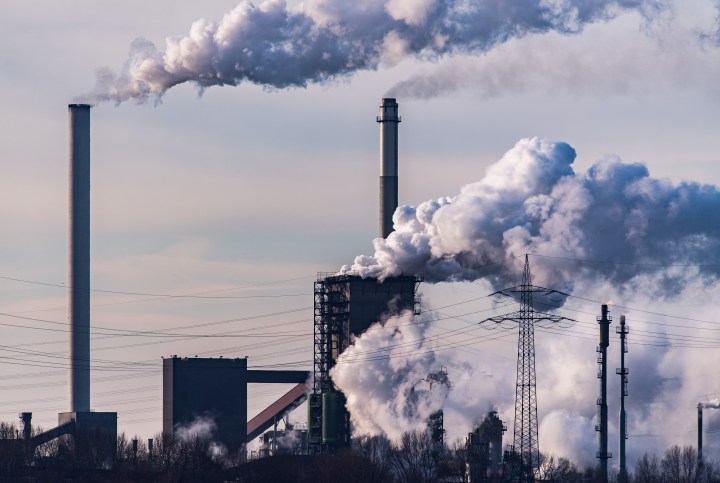 Tech companies have been leaders on climate action in recent years. Many of the industry’s largest and most influential players have pledged to reach net-zero emissions in the coming decades — Google and Apple have said they will decarbonize their energy use and supply chains by 2030.

However, according to a recent report, these companies may be contributing to climate change through a different source: their enormous bank deposits. The report says that America’s biggest banks, like JPMorgan Chase, Citigroup and Bank of America, use this corporate cash to make loans that fund the expansion of the fossil fuel industry, sometimes through projects that might emit greenhouse gases for decades.

For today’s Economic Pulse, “Marketplace Morning Report” host David Brancaccio checked in with Bill McKibben, a longtime environmental activist and founder of the new climate advocacy group Third Act. McKibben argues that while this revelation may disappoint companies trying to practice sustainability, it also presents them with an opportunity to pressure banks to stop funding fossil fuel expansion.

David Brancaccio: Take me through it. Google or Amazon or, I don’t know, Microsoft, they don’t leave their money in their own vaults or in a jar over the fridge or under Jeff Bezos’ mattress, right? It’s with banks. And the banks don’t sit on that money. What do the banks do with the money these big tech firms have handed them that you see as destructive?

Bill McKibben: Well, the banks use that money to leverage all the loans that they’re making to the fossil fuel industry. The big four American banks — Chase, Citi, Wells Fargo, Bank of America — have lent more than $1 trillion to the fossil fuel industry to build new pipelines [and] frack wells since the Paris climate accords were signed [in 2015]. I mean, they didn’t need Donald Trump to sabotage the Paris accords. They were happy to do it themselves.

Brancaccio: So even though Google or Amazon — I mean, pick your tech company — often have earnest goals to reduce their own carbon contribution.

McKibben: That’s right. They’ve all pledged they’re gonna go net zero, which is good. And they’ve made real efforts. I mean, these big tech companies have big sustainability teams that are hard at work. But when this new data about the banks emerged, all of a sudden their carbon emissions, with this factored in, shot through the roof. Google’s up 111%. Netflix produces more carbon from its cash on hand than from everybody in the world sitting around streaming old movies every night. Amazon produces more carbon from its cash on hand than all the delivery vans and warehouses it owns. So it’s not that these companies are doing something sinister. Until a few weeks ago, they didn’t even know this, no one did. But what it now presents is a real opportunity for these guys to, well, to drive down the world’s carbon emissions. Tim Cook from Apple, or Jeff Bezos from Amazon can sit down with Jamie Dimon from Chase and just say, “Hey, bro, we cannot be doing the things we promised as long as you’re handing out money for pipelines. Cut it out.” And then the Chases and Citis of the world will have to make a choice between the fossil fuel industry and the rest of their business. And in so doing run some real chance of helping head off climate change before it gets any worse.

Brancaccio: Is that why your consortium there is picking on the big tech companies like Google and Amazon? I mean, so many companies in so many industries put money in the bank.

McKibben: Well, it’s just these guys have the most of it. And they’re the ones that are most committed to environmental progress, but we’re not picking on them at all. We want to partner with them. We want to pick on the big banks to do the right thing. And so at Third Act, this organizing effort for people over the age of 60, we’ve been busy, for instance, rounding up people who are going to cut up their credit cards at year’s end if these banks won’t start doing the right thing.

Brancaccio: This must have been a complicated calculation. How do you even figure out if money in to a bank gets lent out what its carbon footprint is? That’s a new way of thinking about this issue.

McKibben: Yes, it was a complicated calculation that the analysts performed. There’s always been a space on the worksheet that companies are supposed to fill out to calculate their carbon emissions for emissions that come from their banking relationships. But no one had ever figured out the algorithm to do it before. Now that we have those numbers, it’s possible for these guys to go to work on their banks. Google, for instance, tells a wonderful story about how they spent a year working with every subcontractor who makes the aluminum for the cases on their Pixel phones. They drove down the amount of carbon by 35% with that work. Now they can go do the same work on the banks.

Brancaccio: And the way you’re arguing this, it doesn’t just apply to big companies with gazillions putting it into banks and the banks lending it out, in your view, the wrong way. Individuals can think about where their savings are placed, people who’ve been lucky enough to save for retirement.

McKibben: Absolutely. The numbers were pretty remarkable. It turns out that if you have $125,000 in the mainstream banking system, that money being lent out to the fossil fuel industry is producing more carbon than all the cooking, flying, driving, heating, cooling that the average American does in an average year. People don’t know it because we just put our money away and sort of forget about it. But I mean, it’s like buying four Cadillac Escalades, parking them in the driveway, turning them on, and leaving them running all year. I mean, it’s just a crazy source of carbon that’s actually easier to fix than, you know, your furnace or your car or your stove. All you have to do is switch to a bank that takes the climate seriously.

Brancaccio: We’re very dependent on fossil fuel. I mean, you of all people understand that. You want the banks to cut off the fossil fuel industry, no more money?

McKibben: No. The point of all this work at this point is not to overnight cut off the banks or overnight stop the flow of fossil fuel. That’s impossible. I will say having written the first book about all this in 1989, it would have been nice if we’d gone to work on this many years ago so that we could be cutting off that flow now. But what we need is to, [at] this point, merely to stop the expansion of the fossil fuel industry, giving the money to build projects that are going to last 30, 40, 50 years into the future. The International Energy [Agency], which the oil-consuming nations set up in the 1970s after the oil shocks — the kind of energy intelligence headquarters of the planet — said last year we have to stop new expenditure on fossil fuel infrastructure. The banks have not gotten that message, and we need them to.

Brancaccio: How do you wrestle with this, Bill? I mean, right now, oil and natural gas prices are very high, and it’s causing real hardship to people who can’t make their monthly budgets work. It must make your job harder trying to pressure the financial system to stop lending to the process that expands fossil fuel production. I mean, this moment in history, it’s harder to make the argument.

McKibben: Well, harder and easier. You know, [to] everybody who’s driving past a station with $6 a gallon gasoline, suddenly that new Ford F-150 electric looks a little more promising than it did even six months ago. Not only that, this winter has reminded us that fossil fuel comes with other prices. Like for instance, [Russian President] Vladimir Putin gets 60% of his export earnings from oil and [natural] gas. If we lived in a world that ran on sun and wind, which is now the cheapest source of power on the planet, then Vladimir Putin wouldn’t have an army ravaging Ukraine. There are many, many good reasons to follow the lead that the engineers and scientists have provided by dropping the price of sun and wind and batteries 90% over the last decade. People haven’t caught up to that quite. I think our understanding is that this is still expensive or exotic. But for it to really happen, we need banks investing huge sums in building out that renewable energy instead of just sticking with the inertia and the status quo and the vested interest that is the fossil fuel industry. Overcoming that is hard. It’s harder than it should be. But this new data gives us a new wedge in.