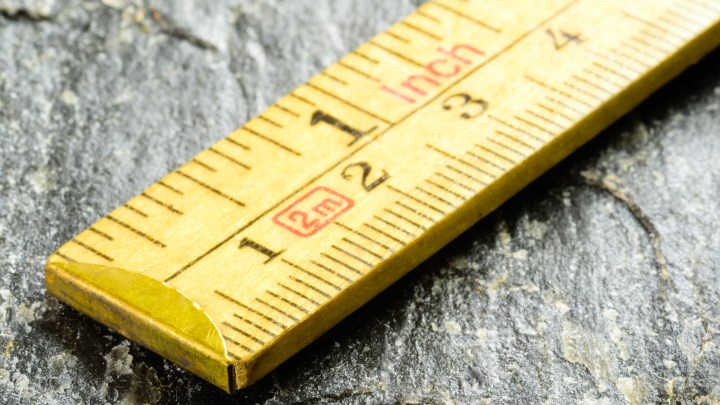 COPY
In the imperial measurement system, an inch is based on the length of three grains of barley. Reimphoto/Getty Images

In the imperial measurement system, an inch is based on the length of three grains of barley. Reimphoto/Getty Images
Listen Now

Now that the United Kingdom is outside the European Union, it’s reviewing thousands of EU rules and regulations to see which it should jettison. Among them is the compulsory use of the metric system of weights and measures.

As an EU member state, the U.K. was required to adopt metrication and sideline what it calls the “imperial system” — that’s feet and inches, pounds and ounces, pints and gallons.

After Brexit, Prime Minister Boris Johnson pledged to reinstate the imperial system, saying that it’s an integral part of British culture, and the government has now launched a consultation with business and the public over whether both systems should be made optional.

But how much of a hot-button issue is this? To measure the mood, Marketplace traveled to the English Midlands city of Shrewsbury, home to one of the U.K.’s best-known metric skeptics.

Seventy-four-year-old Tony Bennett is a self-confessed saboteur. Over the past two and a half decades, he’s waged a campaign against metrication, launching many daring raids across the U.K. after loading up his car with a small armory: a screwdriver, a hammer, a pair of pliers and a crowbar, plus a hard hat and high-visibility jacket to make him look official.

Bennet and fellow members of ARM — Active Resistance to Metrication — have been dismantling and replacing metric road and street signs or amending them to show miles instead of kilometres.

“It’s not that we hate the metric signs, but we just want to keep those that we’re familiar with. Ultimately, this is a campaign that’s more about the preservation of our culture and identity,” he said.

Bennett, who has picked up one conviction for criminal damage over the years, has largely won his battle. Partly because of his campaign, road signs were exempted from enforced metrication; they never became mandatory in the U.K. and are something of a rarity today.

But Bennett— along with the British government — now has his beady eye on the compulsory use of metric weights and measures in the sale of goods and services. As he sees it, this infringes a fundamental right.

“We’d like to be able to go into a shop and order our cheese, our fruit and our meat in ounces and have it weighed in ounces,” he said.

To find out whether that attitude is widespread, we visited a market in the center of Shrewsbury.

The main business organizations representing market traders and other mainstream retailers agree. They say giving more official prominence to imperial measures will create cost and confusion and push up prices — all at a time when the spiraling cost of living has put British household budgets under pressure.

But Georgiana and Stephen Williams, who run a rival butcher’s stall in Shrewsbury Market, welcome the prospect of an imperial measures revival.

And Stephen chipped in: “You ask most people how tall they are, they don’t say, ‘I’m 200 centimeters.’ Even youngsters say: ‘I’m 6 foot.’ It won’t cause any confusion anyway, because most people haven’t really changed.”

Like customer Tom James, for example. “I’d rather have the pounds and ounces. We should never have changed in the first place,” he said.

But doesn’t the metric system — based on multiples of 10 — make more sense? Look at imperial: 16 ounces to the pound, 14 pounds to the stone, 8 stone to the hundredweight and 20 hundredweight to the ton. It’s a mess, isn’t it?

“No, not really,” James countered. “It makes you use your brains.”

But that’s not an argument that persuades another shopper in the market, Chris Williams, who isn’t keen on the imperial system. “No, definitely not. It’s too complicated!” he laughed.

Nor Sean Grommet, who doesn’t feel that imperial is an integral part of British culture. He’s not impressed by the fact that it’s firmly rooted in England’s rural past.

“It’s a stupid way of measuring things,” Grommet said. “It’s based on a barleycorn.” One inch equaled three barleycorns.

And another customer in the market, Bob Burns, preferred the metric system for professional reasons.

“I am an engineer,” he said. “From an engineering point of view, it is metric, it’s got to be metric, and metric is correct. OK? The only thing I’m really in favor of in the imperial system is a pint of beer.”

Millions of British drinkers would say “cheers” to that. In fact the EU, in deference to national feeling, allowed the former member country to continue using the imperial system for draft beer, as well for milk in returnable containers and, as we’ve seen, road signs.

In another concession to the Brits, imperial equivalents displayed alongside the metric measurements were also permitted.

Today, many Brits use both systems, sometimes simultaneously. Supporters of the status quo say this preserves a key characteristic of British culture: muddle.