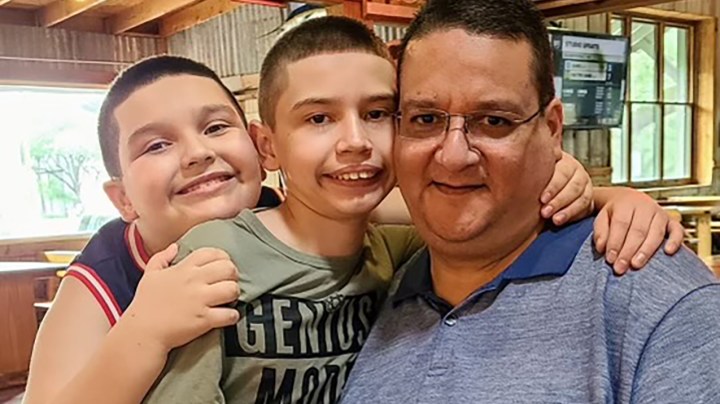 Driving her kids home from grief counseling recently, Margaret Garza asked her two sons what they talked about in the session.

Julius was 12 when his father died of COVID-19 almost two years ago. His little brother, Aidan, was 10. They’re among the estimated more than 200,000 children in the U.S. who have lost a parent or caregiver to the pandemic.

They talked about worries, Julius told her: “It was the worry of the future, like what the future would be like without Dad, because Dad definitely did have plans.”

The U.S. recently passed a grim milestone: More than 1 million people have died from COVID. Many of them were parents — which can, of course, have a tremendous emotional impact on the surviving children. But it can also have financial consequences, and that can add to the trauma.

For a lot of kids, losing parents also means losing the primary breadwinner, which can mean not having enough to eat or having to move.

Garza, who lives near San Antonio, said her kids were worried about those things. “Are we moving?” she said they asked her. “[To] which I said, ‘No, where were we go? This is our house. This is our family.’”

They wanted reassurance. “’We’re going to be okay, right?’” she said they asked. “’And I said, ‘Absolutely,’” she told them.

Garza said she and her husband had been able to plan and save before COVID, and Garza still has her job.

Emily Price is a counselor at the Children’s Bereavement Center of South Texas, where the Garza boys go. She says especially for older kids, the financial worries and the emotional ones can be all tangled up.

Price said she often hears from kids who have lost a parent, “’Dad died and Mom’s working on her own, so now I’m going to get a job, so I can provide some additional income.’ Or, ‘I’m going to not do sports or other activities, so I can babysit after school.’”

And these kids may have more financial issues in the future. Rachel Kidman is a professor in the public health program at Stony Brook University. She says she learned about the long-term effects of losing a parent while studying children whose parents had died of AIDS.

She and her colleagues published one of the first articles in a medical journal looking at the issue of children who lose a caregiver to COVID.

“There are impacts on their educational attainment, they’re more likely, then, to live in poverty,” she said. “Suicide is elevated in this population for 25 years after a parent’s death.”

Kids who lose a parent are also at greater risk of depression, substance use and other mental health problems. There’s a real challenge, though, to helping these families.

Because there’s no national system for identifying kids who have lost a caregiver to COVID, it’s left up to the families to tell schools or look for help — and that can be a tough ask for families already struggling.