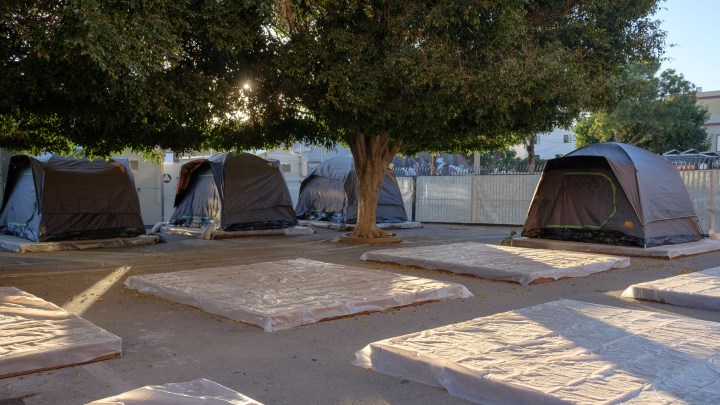 Los Angeles has roughly 48,000 unsheltered people, according to a 2020 count by the Los Angeles Homeless Services Authority. Voter-approved measures to build more affordable housing are underway, but those are not meeting the immediate needs of many people on the streets.

“I don’t want to see people sitting in a parking lot stall and act like that’s housing,” she said. Abdullah is also not a fan of another temporary solution: Tiny Home Villages that offer shelters about the size of a toolshed.

Abdullah said there should be enough space for permanent supportive housing in L.A.

Voters in Los Angeles approved money to create 10,000 apartments over a decade for people experiencing homelessness. But construction is slow due to a complex web of city, county and state hurdles that builders must clear. By late last year, fewer than 1,200 were open.

A much faster solution is master leasing, a process in which service providers pay upfront for an entire building. They have control over who moves in and are responsible for taking care of the property. They also offer social services to tenants.

“It’s a way to get the units that are available and get the people that need to be housed or rehoused housed quickly,” said Veronica Lewis, director of the Homeless Outreach Program Integrated Care System. The nonprofit has already started leasing properties, she said. It’s entered into seven in the last year and a half.

Meanwhile, the state of California is working with cities to speed up new construction.

“We’re in a better position when people are acting with a sense of urgency, getting their rezoning done as quickly as they can,” said Megan Kirkeby, deputy director of housing policy for California’s Department of Housing and Community Development.

But some cities in California are pushing back against a new state law that would allow construction of multifamily housing units on many single-family lots.