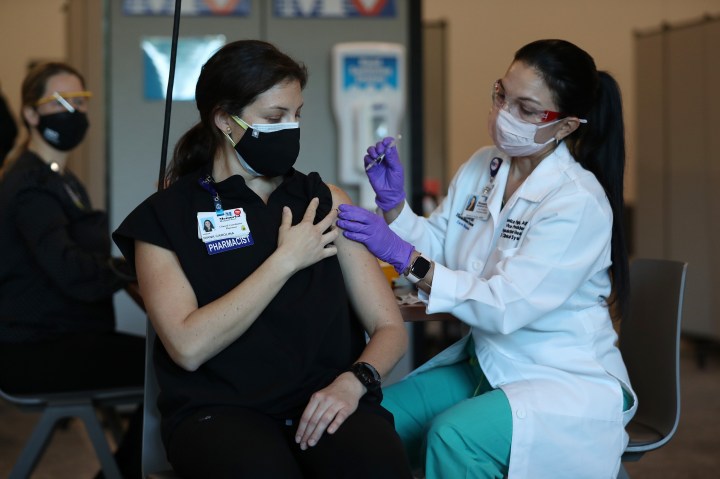 The Biden administration warned that 100 million Americans could be infected with COVID-19 as we head into the fall and winter. We may also see “a new generation of vaccines” later this year, but the White House’s COVID response team says it lacks the funding to ensure they’re accessible to all Americans.

“I want to make sure we have enough resources that we can buy enough vaccines for every American who wants more. I think that is absolutely critical.  We do not have the resources to do that right now,” said Dr. Ashish Jha, the team’s response coordinator, at a press briefing last week.

“So without additional funding from Congress, we will not be able to buy enough vaccines for every American who wants one once these new generation of vaccines come out in the fall and winter,” he continued.

The Biden administration wants Congress to approve a COVID-19 bill that would provide around $10 billion in funding for vaccines and treatment, less than half of the $22.5 billion it initially wanted. But Senate Republicans say they won’t support the bill until Democrats approve an amendment that would ensure Trump-era restrictions on immigration stay in place.

Scarce on resources, the government may only be able to provide the next generation of vaccines to “the highest-risk Americans.” Administration officials are also considering “transitioning responsibility for vaccines and some treatments to the traditional insurance market as early as next year,” according to Politico.

The Kaiser Family Foundation crunched the numbers to determine whether the U.S. has enough supply of the current COVID-19 vaccine in the event the government does not get more funding.

All Americans may soon be able to receive the vaccine amid promising news from Pfizer, which said on Monday that three doses of its COVID-19 vaccine provide “strong protection” for children younger than 5 — the only group that’s currently ineligible. Meanwhile the Food and Drug Administration is evaluating data from Moderna, which wants to provide their vaccines to this age group during the summer.

KFF found that the government does not have enough vaccine doses to fully provide all Americans with a fourth shot, also referred to as a second booster. However, the government has enough doses to ensure that 70% of those 50 and older can receive a fourth dose.

If the government no longer provides free vaccines and treatment, health experts say that the U.S. health insurance market does have some systems in place to handle the transition, but challenges may lie ahead.

“Like any supply chain, every single health care system and doctor’s office that wants to purchase a vaccine will have to go figure out where they can do it,” said Melissa Thomasson, an economics professor at Miami University.

Signe Flieger, an associate professor of public health and community medicine at Tufts University, said one concern she has with a potential transition to the insurance market is the message it sends: Making COVID vaccines free puts consumers at ease. But telling them they have to deal with their insurance company may make them feel fearful or uncertain about having to deal with this potential burden.

“If people have been getting their recommended vaccines and boosters, and another one comes down, they might be more willing to sort of go through those steps,” Flieger said. “But if cost was already on your radar, and you were hesitant to begin with, I certainly think that this doesn’t help.”

Dr. Reshma Ramachandran, a family physician and fellow at the Yale National Clinician Scholars Program, said that the U.S. has a Vaccines for Children program that provides vaccines for free to children whose families cannot afford them, while Medicare Parts B and D cover vaccines for older adults.

Ramachandran also noted that insurers are actually mandated under the Affordable Care Act to cover the cost of vaccines.

“However, that doesn’t mean that it’s not a cost to patients,” Ramachandran said. “Insurance premiums can rise in response to cover the vaccines.”

Ramachandran pointed out that if Pfizer ended up charging $200 per dose, which is the same price as its pneumococcal vaccine, that would be “a significant cost for any plan to be able to cover.”

And when it comes to COVID-19 treatments, Ramachandran said one concern is that not only might insurers raise their premiums to cover their cost, but patients would have to deal with co-payments. Paxlovid, like the COVID-19 vaccine, is also free and currently paid for by the government, although those who are uninsured may face consultation charges, reported the New York Times.

Ramachandran noted that individual insurers may have to procure vaccines or treatments on their own, instead of going through the U.S. government, which was able to buy in bulk. If they do, they’ll likely have less purchasing power and thus face higher costs.

However, she said it’s unclear how high premiums would go up, because she’s unsure how much Moderna and Pfizer would ultimately end up charging in this scenario.

And that’s for those with health insurance. In 2020, 31.6 million people in the U.S. were uninsured. Essential workers who are at higher risk of getting COVID — which includes grocery store clerks and airline employees — are uninsured at 13% compared to 8% of nonessential workers, according to the Kaiser Family Foundation.

“As a society with private health insurance we’ve decided that we ration care based on ability to pay,” said Miami University’s Melissa Thomasson.

Thomasson said if people who are uninsured can’t afford a vaccine, that means those who are especially vulnerable are at greater risk of getting COVID-19.

“Because this is a public health situation, to the extent that more people are at risk, everybody’s more at risk,” Thomasson said.