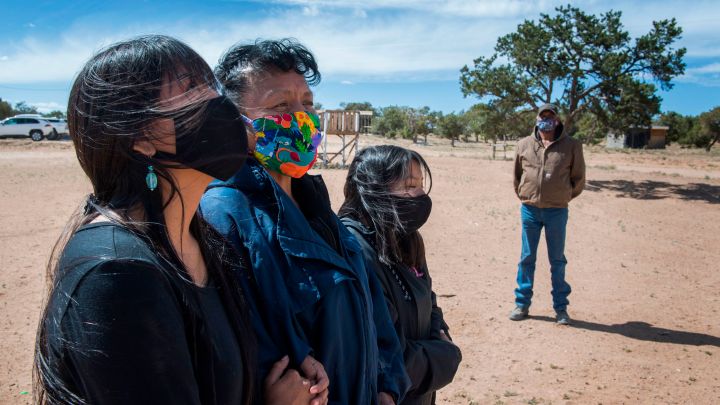 COPY
When it comes to vaccinations, several Native American communities across the country have successfully sprung into action, including the Navajo Nation. Mark Ralston/AFP via Getty Images

When it comes to vaccinations, several Native American communities across the country have successfully sprung into action, including the Navajo Nation. Mark Ralston/AFP via Getty Images
Listen Now

Native Americans have been among the hardest hit by COVID-19. They have been more than three times as likely to get the virus as white Americans.

In response to the crisis, many tribal communities pushed their efforts and are reporting high vaccination rates.

On top of that, the most recent COVID-19 relief bill, which was signed into law last week, will give $15 billion in grants to enhance and expand vaccine distribution, “especially in underserved communities,” including Native American ones.

In late February 2020, it became clear to to Dr. Spero Manson that the Native American communities in and around Denver were going to be hit especially hard by COVID-19.

“Several individuals, elders in my community, here in the greater Denver area, contracted coronavirus and were subsequently hospitalized. We became very concerned,” said Manson, the director of the Centers for American Indian and Alaska Native Health at the Colorado School of Public Health.

He was right to be concerned. By December, the Centers for Disease Control and Prevention found the death rate for Native Americans from COVID-19 was nearly twice as high as it was for white Americans. There are a lot of reasons, like a high incidence of preexisting conditions and cramped living conditions.

But Manson also beams when talking about how quickly and independently the community pushed vaccinations into high gear. He said part of that has been “a recognition, historically, that we ultimately have to depend on ourselves in terms of self-reliance, assets and resilience.”

Several Native American communities across the country have successfully sprung into action, like the Navajo Nation’s Department of Health, which reports it’s fully immunized more than 69,000 people.

“We didn’t want to put it out there publicly, because what’s happening, it’s kind of like ‘Hunger Games.’ Soon as somebody hears there’s vaccines available, everybody tries to sign up,” he said.

Randall Akee, a professor of public policy and American Indian studies at the University of California, Los Angeles, pointed out that a lot of that will go beyond vaccines into areas like infrastructure.

“One really important aspect is the funding that’s allocated of almost a billion dollars for broadband access, which again, in the age of COVID, is incredibly important for education and the access to public health information.”

The vaccine, Akee said, is important, but mitigating the spread of COVID-19 will take more than just two shots to the arm.