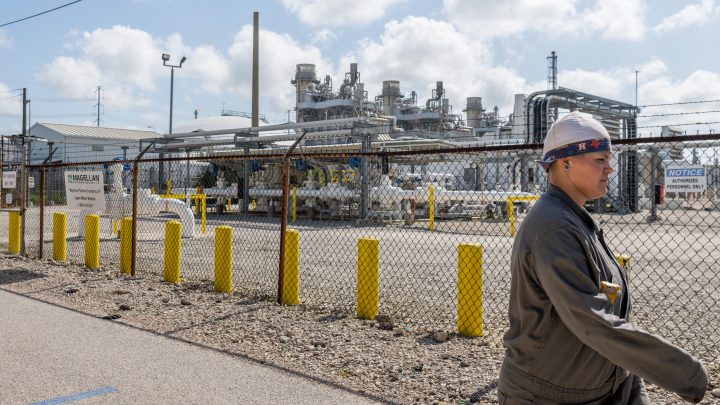 A barrel of West Texas Intermediate oil costs about $110; and Brent crude, mainly refined into diesel fuel and gasoline, is at $113. The national average price of gasoline: $4.59 a gallon.

Late last week, the House of Representatives passed a bill that would outlaw what it calls predatory gas prices and also expand federal authority to investigate price gouging allegations.

But getting that oil out of the ground and turning it into something we can put into our cars and trucks isn’t that simple. Even if our refineries are doing it as fast as they can, they’re producing a lot less than they were just a couple of years ago.

In fuel refining circles there’s a phrase that gets thrown around quite a bit: crack spread.

“The crack spread is the difference between the petroleum product price, such as diesel or gasoline, and crude oil prices,” said Jeff Barron, an economist at the U.S. Energy Information Administration.

It’s basically a refiner’s profit margin, he said. Right now, the crack spread is entering record-breaking territory. That’s one reason the price of gasoline or diesel doesn’t drop even when the price of oil does.

Jason Gabelman, a director at Cowen, said refiners aren’t holding anything back to try to inflate prices.

“You know, they’re trying to produce as much as they can, because refining margins are where they are. So they have every economic incentive to run all in,” he said.

According to the Energy Information Administration, the United States will be using about 95% of its refining capacity in June. Yet, we’re refining about a million barrels per day less than we were just a couple of years ago. Why?

“We’re still dealing with COVID hangover, you could call it,” said Hugh Daigle, who teaches petroleum engineering at the University of Texas at Austin.

When COVID-19 hit and demand for fuel fell dramatically, a lot of refining companies shut plants down, he said.

“Some refineries just shut down because of lack of demand, and they’re not coming back on. Then there was some weather-related issues also,” Daigle said. Last year’s freeze in Texas knocked several refineries offline, and some are still not operating at full capacity.

But if refiner’s margins are so big and they’re making a killing on every barrel of fuel they get to market, why don’t energy companies just build more refineries while the money’s there?

It takes a lot of money and time to build refineries. Additionally, “investors do not want to see companies pouring money into organic oil and gas growth,” Gabelman said.

The long-term prospects for fossil fuels are uncertain. Most investors don’t want to be asked to chip in for long-term growth. In the present economic climate, they’re demanding a quicker return on their investment.